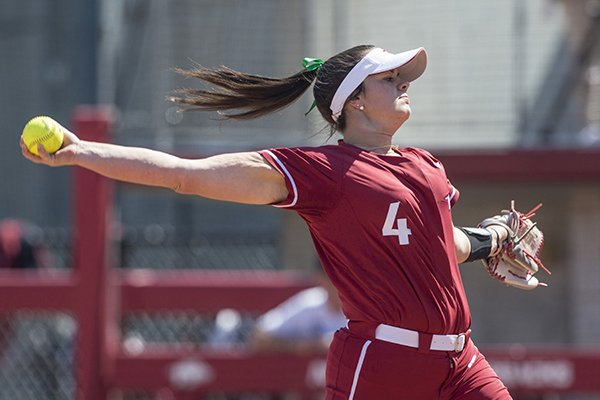 Arkansas pitcher Mary Haff throws during a game against South Carolina on Sunday, March 17, 2019, in Fayetteville.

FAYETTEVILLE -- Sophomore Mary Haff tied a University of Arkansas softball record with 16 strikeouts Saturday as the No. 18 Razorbacks outlasted Furman 6-5 in 12 innings at rain-soaked Bogle Park.

After surrendering a run in the top of the 12th, Arkansas (29-14, 6-9) manufactured a pair in the bottom of the inning. Senior pinch-hitter Sydney Benz hit a sacrifice fly to left field with one out, scoring Kayla Green with the winning run.

"I think our team had a lot of fight in that inning," Razorbacks Coach Courtney Deifel said. "Furman's a really tough team, although their record may not reflect the team that they are. I'm proud of our team for continuing to fight and finding a way to get it done.

"It's just nice to get that last punch."

With the score tied at 4-4, Haff (14-9, 2.16 ERA) replaced starter Autumn Storms with one out in the fifth inning. She went the final 72/3 innings, allowing just three hits -- one a solo home run to Furman's Casey Bigham in the 12th. Her 16 strikeouts ties the single-game record set by Heather Schlictman against Marshall in 2004, who did it in 11 innings of a 1-0 Razorbacks' victory.

"I didn't really get to warm up before the game, so you just have to go in and work with what you've got," Haff said with a chuckle. "But I felt great and was just working with the umpire's zone. And my defense was just playing great behind me, so they made it easy for me."

Haff struck out the side in three innings, including sitting down the Paladins (10-27) in order in the eighth.

"She was phenomenal for us today and just put the team on her back -- basically said, 'I got this until you guys can score,' " Deifel said. "That's what playing for a team is all about, and she was great today."

The first three Razorbacks to bat in the first recorded hits. Sophomore Hannah McEwen led off with a single and advanced to third on Danielle Gibson's double. Senior Ashley Diaz then brought both runners home with a single up the middle for a 2-0 lead.

Gibson made it 3-0 in the second with a solo home run over the right-center-field fence.

After Furman scored its first run in the top of the fourth, Diaz equaled the task in the bottom of the inning with an RBI single to right to make it 4-1.

Paladins sophomore Marissa Guimbarda evened the score at 4-4 in the fifth with a three-run home run, her team-leading 13th of the season.

Trailing 5-4 heading into the bottom of the 12th, senior Katie Warrick led off with a single, then advanced to third when Green reached on a Furman throwing error. Junior Sydney Parr's sacrifice fly to left scored pinch-runner Ryan Jackson to tie the score. After Green moved to third on senior Haydi Bugarin's one-out double down the third-base line, Benz hit her sacrifice fly.