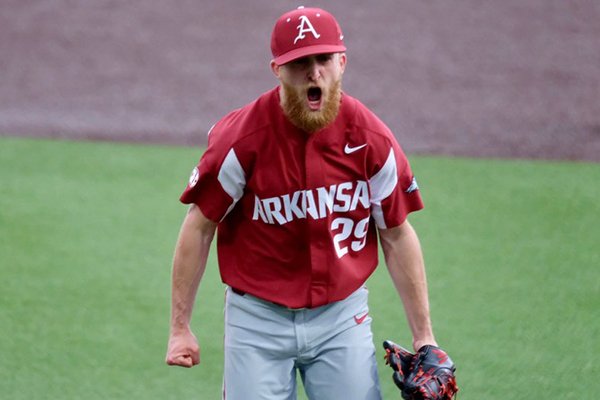 Arkansas pitcher Marshall Denton celebrates after recording the final out of a game against Vanderbilt on Sunday, April 14, 2019, in Nashville, Tenn.

Arkansas scored five runs in the ninth inning to defeat No. 7 Vanderbilt, 14-12, Sunday at Hawkins Field.

Marshall Denton fanned the final two Commodores to earn the save for the No. 10 Razorbacks and salvage the final game of the three-game series.

Arkansas rallied with 22 hits, the last of them a two-out single by Casey Opitz that turned out to be the winning runs when Vandy scored one run in the ninth on a solo homer. The Hogs got the lead on Jacob Nesbit's RBI double.

Denton, the redshirt sophomore, had struggled earlier in the week when he was the starter in the Tuesday victory over Oral Roberts. Zebulon Vermillion got the victory after getting the final out in the eighth in relief of Matt Cronin. Denton fanned the only two batters he faced.

Heston Kjerstad and Opitz both had four hits for the Hogs. Trevor Ezell and Casey Martin each had three hits. Opitz hit his first career home run.

Vandy had three homers on a day when the wind was gusting out to left field by 20 mph.

"We kept fighting and we felt we deserved to win," Arkansas coach Dave Van Horn said. "We got embarrassed yesterday and we won today in what in my mind is the toughest place to play in our league."

Of the ninth inning rally, Van Horn said it was a series of clutch at-bats, especially the hits by Nesbit and Opitz for the last three runs against Vandy closer Tyler Brown. It was Brown's first loss. He entered 1-1 with seven saves and had only allowed four runs all year.

"That was two super hits with two outs," Van Horn said. "Everything they brought out there pitching-wise was throwing 92 to 96, but it almost seems normal after awhile and we hit them.

"But you look up going to the last inning and we had all those hits and not many runs. We just didn't get many up in the air to take advantage of the wind."

On going with Denton, Van Horn said there was a good appearance in the blowout Saturday that made the staff think he was the guy for the end.

"That right-on-right matchup first, he really battled and got him," Van Horn said. "He's not a guy we like to leave out there against a lefty, but quite honestly, he's all we had."

The Hogs fought from behind twice in the game. They scored five runs in the ninth to pull ahead, 14-11. With one out in the ninth, Casey Martin singled and Matt Goodheart plated him with a triple. Dominic Fletcher tied it with a single to center. Heston Kjerstad, who has three hits on the day, fanned. A walk to Jack Kenley put Fletcher in scoring position for Jacob Nesbit. The Hogs took the lead with Nesbit's double off the wall in left, with Fletcher scoring and Kenley taking third base. That knocked out Tyler Brown and brought on reliever Zach King. Casey Optiz plated two runs with a single to left, the 22nd hit for the Hogs. Christian Franklin bounced out to end the inning.

The Hogs trailed 7-3 after three innings. They battled back to lead, 8-7, and trailed 11-9 after Matt Cronin gave up a two-run homer in the seventh.

Vandy is not going quietly. Zebulon Vermillion gave up a lead-off homer to Austin Martin. That's the third lead-off homer for the Commodores in the game. J.J. Bleday bounced out to second base for the first out. But Vermillion issued back-to-back walks to end his day. Marshall Denton relieved and fanned Harrison Ray and pinch-hitter Cooper Davis for the save.

The Razorbacks continue to pile up the hits, but the Commodores lead because of the long ball. Heston Kjerstad doubled to open the 8th, then came around to score on back-to-back flies to deep left, the last a sacrifice by Jacob Nesbit. Reliever Jake Eder is out of the game after Casey Opitz singled. It's the 17th UA hit of the game. Vandy has 11 hits, but three of them are homers. Tyler Brown relieved for Vandy. Christian Franklin bounced out, meaning the Hogs will have to score at least two in the ninth.

Cronin issued a two-out walk to Julian Infante. Zebulon Vermillion gave up a stolen base, then fanned Isaiah Thomas to send the game to the 9th.

Christian Franklin reached on a strikeout and wild pitch. Trevor Ezell's drive was caught on the warning track in center. Franklin motored to third on Casey Martin's single to center. Matt Goodheart fanned and Dominic Fletcher popped to dead center to end the threat.

With no closing situations for the Hogs in the first two games, Matt Cronin is on to pitch the 7th. Austin Martin led off with a single, his third hit of the day. He was picked off first by Cronin. J.J. Bleday walked and Phillip Clarke hit a two-run homer into the seats in right field. It's the third homer of the day for the Commodores.

The Commodores went to the bullpen for another lefthander, Jake Eder. He's the third Vandy pitcher on the day. He got the Arkansas leadoff man out for the first time on the day when Matt Goodheart popped to left. Eder, hitting 98 mph on the radar gun, gave up a one-out single to Heston Kjerstad. Jack Kenley and Jacob Nesbit both walked to load the bases, but the threat ended when Casey Opitz bounced out to second base.

The Hogs relieves with Kevin Kopps to start the bottom of the inning. Patrick Wicklander gave up three runs in three innings of work. Kopps worked a 1-2-3 sixth. The Hogs have outhit the Commodores, 14-9.

Arkansas took the lead on Trevor Ezell's two-run single. It was his third hit of the day. Jack Kenley led off with a double. Jacob Nesbit bounced out sharply to short, Kenley holding at second. Casey Opitz walked. Both runners moved up on Christian Franklin's slow bounce out to shortstop. Trevor Ezell plated both with a sliced single to right, with Ezell moving to second when the catcher misplayed the throw home. He moved to third on a wild pitch but was stranded on Casey Martin's bounce out to third.

But Vandy answered with two to reclaim the lead. After a bounce out to open the inning, Patrick Wicklander gave up a walk and J.J. Bleday's double off the wall in left center. Christian Franklin got the ball in quickly to keep a runner at third. Ethan Paul walked to load the bases with one out. Phillip battled back from a 1-2 count to draw a bases loaded walk to tie the game, 8-8. Harrison Ray's deep fly to left center played Bleday to give the Commodores the lead again. Wicklander stranded two with a strikeout.

Patrick Raby's day ended after two batters in the fourth. Casey Opitz hit his first career homer, then Christian Franklin walked. Vandy turned to lefty sophomore Hugh Fisher out of the bullpen. Raby had given up just two extra bases coming into the game. The Hogs have three. Trevor Ezell lined out to deep left. Franklin held at third on Casey Martin's double into the corner in left. Matt Goodheart fouled off a pair of two-strike pitches before plating one run with a ground out to short. Dominic Fletcher's RBI single to left cut the lead to 7-6.

Patrick Wicklander's second inning of relief was solid. He got the Commodores 1-2-3, playing a part in two plays in the field. He covered first for the first out on a grounder to Trevor Ezell. Then, on Julian Infante's bunt, Wicklander bobbled the ball and then threw to first for the third out. He got Ty Duvall on a called third strike in between those two plays.

Arkansas goes to the bullpen with lefty Patrick Wicklander to open the bottom of the third inning. Julian Infante greeted him with a no-doubt homer to left field. It's the second straight inning Infante opened with a homer. Wicklander hit two batters and gave up a single to load the bases with no outs. After a visit to the mound by pitching coach Matt Hobbs, Wicklander settled down to fan Ethan Paul and Phillip Clarke. Harrison Ray's pop to left set the Commodores down.

The Hogs added one run on Trevor Ezell's second double of the day. Jack Nesbit and Casey Opitz opened with singles, Opitz beating out a bunt. After Christian Franklin grounded into a double play, Ezell plated Nesbit with a double to left.

Arkansas starter Cody Scroggins gave up five runs in the second as the Commodores batted around. Scroggins is struggling to get his slider over the plate, just missing. He's walked four and is at 65 pitches through two innings. He got out of the inning when Heston Kjerstad went to the wall to catch a fly ball.

Julian Infante lifted a wind-blown homer to left on an outside slider to open the Vandy second. Then, after two one-out walks, Ethan Paul and Phillip Clarke delivered back to back singles to right. Two scored on Clarke's soft liner in front of Heston Kjerstad. A wild pitch and a ground out to short plated Paul. Stephen Scott tripled off the walk in right center to make it 6-6-3.

The Razorbacks scored two runs with two outs against Vandy starter Patrick Raby. Trevor Ezell doubled to lead off, a drive that was wind blown and hit high off the wall in left. Matt Goodheart drew a one-out walk. Heston Kjerstad's pop up fell between the third baseman and left fielder to plate Ezell, Goodheart motoring to third. Jack Kenley singled to make it a 2-0 lead. The inning ended with Kenley getting picked off at first.

Vanderbilt answered with one run against Arkansas starter Cody Scroggins. Austin Martin singled and J.J. Bleday walked to open the inning. Ethan Paul reached on a fielder's choice, with Bleday forced at second. Phillip Clarke stroked a 3-0 fast ball through the middle for an RBI. The Commodores would load the bases on a walk, but Scroggins retired Ty Duvall on a pop to right to end the threat.

Vanderbilt won the opener, 3-2, on Friday night in a pitching duel between Drake Fellows and Arkansas' Isaiah Campbell. There was nothing close about Saturday's game. Moved to afternoon to avoid bad weather, it was all bad news for the Razorbacks. The Commodores scored seven runs before an out was made in the bottom of the first and whacked the Razorbacks, 12-2. Vandy led 12-0 after three innings, battering starter Connor Noland and reliever Kole Ramage.