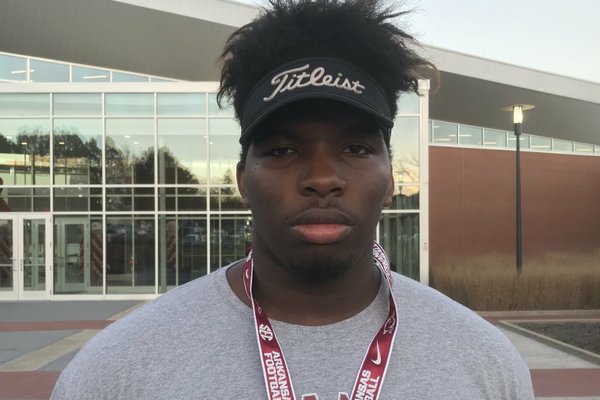 FAYETTEVILLE — Carthage, Texas, four-star offensive lineman Ty’Kieast Crawford (6-6, 320) has a lot of options on where to play his college football, but one program stands above the rest right now.

That was solidified this weekend after taking his official trip to Arkansas, one week after an unofficial to Alabama.

It was memorable enough visit that Crawford went ahead and made his pledge to Arkansas public on Sunday afternoon, becoming the sixth commit of the 2020 class and the second one to jump into as a commit on Sunday.

“I love the college, it’s amazing,” Crawford said. “It’s like there is something new every time I go back. No matter who you are, Arkansas treats you like you are family. Amazing atmosphere, amazing facilities, their academic rooms are amazing.”

He had committed privately to Arkansas back on March 9.

Crawford's official visit, which was Friday through Sunday and came about a month after his last unofficial trip to Arkansas, gave him a chance to further develop his relationship with Razorbacks coaches.

"It was actually pretty fun,” Crawford said. “You get to know them way better than you already do. I got to talk to them a little bit more."

He was not floored by the visit to Alabama.

"It was alright, but to me it's not the hype that everybody was talking about,” Crawford said. “I was expecting it to be, but it really wasn't."