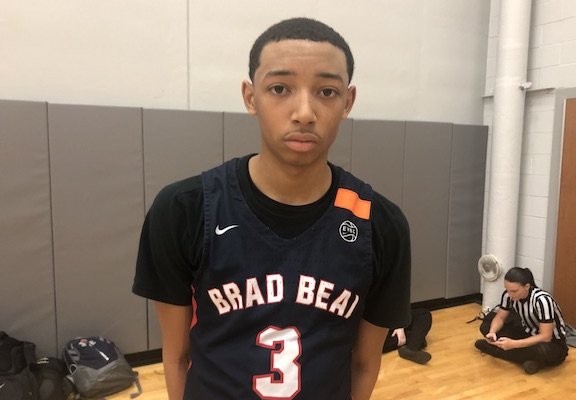 FAYETTEVILLE — He may look just like the high school freshman that he is, but Sylvan Hills guard Nick Smith has also already proven to be a baby-faced assassin on the basketball court.

Smith (6-3, 170), a 2022 prospeect who led the Bears in scoring this past season at 20 points per game, was in Fayetteville and Springdale this weekend showing off his talent in The Warmup AAU tournament.

He was part of a Brad Beal Elite 16-and-under squad that went unbeaten through its first five games of the event before falling to Team Griffin 63-54 Sunday in the semifinals of bracket play.

“We are pretty good, pretty athletic,” Smith said. “I feel like there isn't anybody in the country that can mess with us when we are on.”

Smith, who already has offers from Oklahoma State and Oral Roberts University as well as interest from Arkansas, Auburn, Ole Miss and Texas, was named all-state at the conclusion of his first high school season.

“I think my strengths are my scoring ability, my passing ability and ability to get my team open shots,” Smith said. “I need to work on my strength - my upper body strength.

“The school season was a great experience and I had to carry the load as a freshman. It has me looking forward to what we can do in the future.”

Several Arkansas-based AAU teams hoped to land Smith for the spring and summer season, but he chose Brad Beal Elite, a squad sponsored by the former Florida and current Washington Wizards NBA player.

The extra exposure is already paying off for Smith.

“I’m blessed because people around me don’t get to do things like this,” Smith said. “Shaka Smart and Texas have just started showing interest along with Ole Miss, Auburn and Arkansas.”

Smith had developed a good relationship with former Arkansas coach Mike Anderson and hopes to do the same with new Razorbacks hire Eric Musselman.

"I am hoping to get to meet him soon and find out what he is like," Smith said.

Smith is viewed as the best player at Sylvan Hills since Archie Goodwin, who played one year at Kentucky then jumped to the NBA.

“That’s my guy,” Smith said. “I have always been looking up to the top of the gym and seeing that he was the Gatorade Player of the Year. One day I want my name up there.”