UA coach would do well to watch Ford 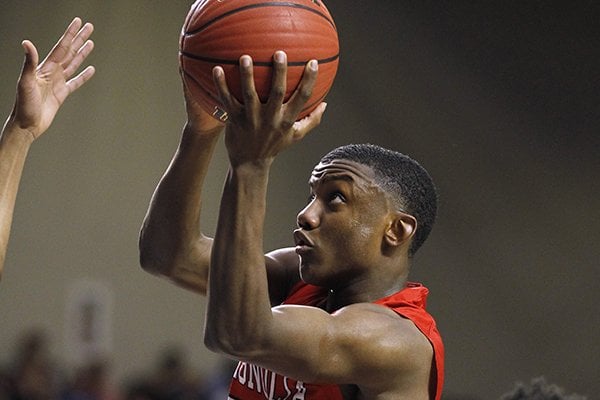 Arkansas men's basketball Coach Eric Musselman should have an impressive list of in-state talent to choose from the next few years.

The 2021 and 2022 in-state classes have several prospects with Power Five talent.

Magnolia freshman guard Derrian Ford, 6-2, 181 pounds, will likely be a player Musselman keeps contact with in the future. Ford has scholarship offers from Oklahoma State and Baylor. He also had an offer from former Texas A&M coach Billy Kennedy.

He's playing for Little Rock based 15-under Team South this spring and summer.

Ford was named the Arkansas Democrat-Gazette Underclassman of the Year after leading Magnolia to the Class 4A state title while earning MVP in the Panthers 78-76 overtime victory over Mills.

His father Darnell played point guard at Southern Arkansas and helped the Muleriders to the 1990 Arkansas Intercollegiate Conference championship. He had a tryout with the Los Angeles Lakers' summer team before getting cut after three games.

"We started off early," Derrian Ford said. "He taught me all the fundamentals. He still works me out to this day. He gets me stronger. No one probably knows, but he's the person that has got me to where I am other than God."

Jonesboro Coach Wes Swift watched from the stands as Ford scored a game-high 28 points and had 6 rebounds and 4 assists in the state title game.

"Derrian is an elite athlete who needs very little space to get to the rim," Swift said. "He plays with much more control than you normally see from kids his age. He has solid court vision and shoots the ball well enough to keep defenses honest at this point."

Ford, who has a 4.0 grade-point average, said he is confident, which gives him an edge.

"With all the work I've put in, I think I should be able to play on the court with anybody," he said. "So I'm very confident in my game, and I feel like I'm the best player whenever I step on the court."

The reviews from the in-state prospects about the hiring of Eric Musselman as Arkansas' coach have been positive.

Two other top prospects in the state -- Marion junior guard Detrick Reeves and Barton sophomore guard Terran Williams -- said they are impressed with Musselman's resume, which includes being an NBA assistant for six teams while also being the head coach of the Golden State Warriors and Sacramento Kings.

"I personally think Coach Musselman can continue where Coach [Mike] Anderson left off at and take the program to another level," Reeves said. "He has experience on the pro and college level, so I know he will be beneficial to the Razorback nation. I would love to meet him."

Williams, 6-4, 175, has offers from Oklahoma State and TCU with interest from several others.

"I just hope he brings positive energy and hope I'm still on the radar," Williams said.

Both were drawing interest from the previous Arkansas staff.