Noland will reset as midweek starter 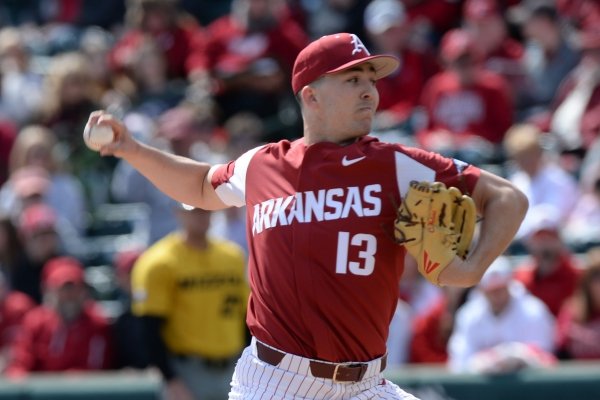 Arkansas starter Connor Noland delivers to the plate against Missouri Saturday, March 16, 2019, during the first inning at Baum-Walker Stadium in Fayetteville. Visit nwadg.com/photos to see more photographs from the game.

FAYETTEVILLE -- Freshman right-hander Connor Noland will be out of the University of Arkansas baseball team's weekend starting rotation for the first time this season.

Instead of going against No. 2 Mississippi State in the second game this weekend, Noland will start against the University of Arkansas-Pine Bluff tonight when the Golden Lions (6-27) play the No. 10 Razorbacks (26-10) at Baum-Walker Stadium.

Noland had been the second weekend starter in his nine previous starting assignments.

Noland (0-2, 5.94 ERA) didn't record an out in facing five batters in Vanderbilt's 12-2 victory over Arkansas on Saturday at Hawkins Field in Nashville, Tenn. He allowed 5 runs, 4 hits and 1 walk. One of the hits was a shallow fly by J.J. Bleday that shortstop Casey Martin couldn't hang onto when left fielder Christian Franklin ran into him.

"We want to get Connor some time on the mound," Razorbacks Coach Dave Van Horn said. "He needs to pitch."

Tonight's game will mark the second midweek appearance for Noland. He threw a scoreless inning of relief in the Razorbacks' 8-2 victory at Missouri State on March 26 after going 1⅔ innings at Alabama three days earlier.

Noland, who also plays quarterback for the Razorbacks, has pitched 33⅓ innings, allowing 39 hits with 22 strikeouts and 10 walks. He has gone at least 4⅔ innings in six starts, with a season-high 5 innings against Louisiana Tech.

Van Horn believes Noland will bounce back with a strong start tonight.

"I expect him to go out and pitch really well and command the strike zone," Van Horn said. "That's what I want to see him do. Get ahead in the count, because that's when he's at his best.

"He's got a good fastball with some movement and some sink. He's got good off-speed pitches."

"You've got to get him up on that horse again," James said. "He got knocked off, and you need to get him back up there in the saddle as quickly as possible because you're going to need him down the road.

"So I kind of expected to see him. I think it's actually better for us because our guys will get geared up to face a pitcher who's been starting SEC games. We know [Noland] is really talented, but he's a freshman and there's a learning curve there."

Van Horn, in his 17th season at Arkansas, has been pushing for the Razorbacks to play in-state teams, and the UA announced in August it had scheduled games against UALR and UAPB.

"In the past, Arkansas was kind of viewed as being the big kid in the neighborhood with all the good toys, but he didn't want to play with anybody else," said James, who is in his ninth season as UAPB's coach. "Now this gives the University of Arkansas a different look where they'll help other schools in the UA System.

"It's easier on scheduling for all of us. It just makes sense. I think it's also a sign of the times and everything progressing within our state, and especially within our university system. You've got a group of people now that understand in order for us all to succeed, we have to work together."

"Dave Van Horn is a great ambassador at our flagship university to get this started," James said. "He's a good person and has done a wonderful job with his program, and he's always been very supportive and encouraging to other coaches in the state."

"No, no, not at all," Van Horn said. "I'm glad we're playing them. I'm looking forward to playing them this year and every year. I think it's good for baseball in the state."

James said playing the Razorbacks after they had a 10-run loss to UALR might not be the best timing for the Golden Lions.

"They're going to be very angry," James said with a laugh. "We're going to be dealing with a wild Hog. We've got to be ready to play our best game because we know Arkansas is going to come out fired up."

Van Horn said he expects Noland to be fired up about starting tonight and not dwelling on his last outing at Vanderbilt.