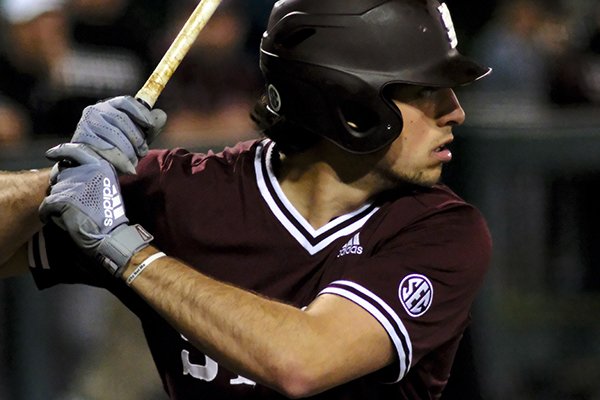 Mangum, a senior, is seven hits shy of tying the SEC record for hits in a career. Mangum has 345 hits, second all-time in the league behind former LSU first baseman Eddy Furniss, a College Baseball Hall of Fame member who recorded 352 hits between 1995-98.

Mangum is batting .398 this season out of the leadoff position, and has an 18-game hit streak entering Thursday's series opener against the Razorbacks. He has at least four hits in every SEC series this season, and recorded seven hits during a series against Auburn last month.

"He’s a great hitter," said Arkansas pitcher Isaiah Campbell, who has allowed two hits in five career matchups against Mangum. "I’m just ready for the challenge to face him and their whole lineup on Thursday."

Since a breakout 9-for-13 performance in a series against Arkansas his freshman season, Mangum has struggled against the Razorbacks the past two years. He is 6-for-31 with a pair of walks in his past eight games against Arkansas, including a 3-for-13 series in his only trip to Fayetteville two years ago.

Mangum (6-1, 179 pounds) returned to Mississippi State after he was drafted by the New York Mets in the 32nd round of last year's draft. He also was draft-eligible as a sophomore.

"I respect his decision," Arkansas coach Dave Van Horn said. "They didn’t want to pay him enough money and he said, ‘I’m going to go back and probably have my degree, I’m still going to play pro ball and I’ll earn my way to the big leagues if I’m good enough.’ I know they’re loving it.

"He’s an incredible hitter and turned down the money and came back for his senior year and he sets the table and drives runs in the second, third and fourth time up."

Mangum is not the only player chasing the SEC career hits record this season. LSU senior Antoine Duplantis has 312 hits entering the Tigers' weekend series against Florida.