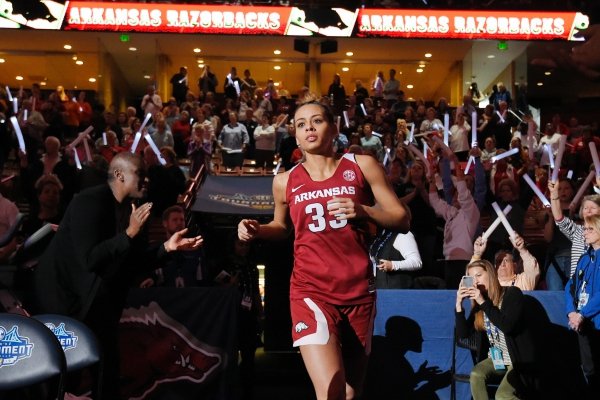 Invitations to participate in the 2019 Pan American Games Team Trials were in the process of being sent out. One name being mentioned meant more to him than the others: Chelsea Dungee.

Neighbors then sent his sophomore sensation a text to inform her she would be among the estimated 24-36 players to receive one.

"It's really big. Getting an opportunity like this and having a chance to make the USA team, I'm not worried about or thinking about not being first team anymore," Dungee told WholeHogSports on Wednesday. "I'm just so excited for this. It's a huge deal and a big honor."

Trials to select the 12-member team will be held May 16-20 at the U.S. Olympic Training Center in Colorado Springs. Training camp will begin July 23 and players will return home following the conclusion of the tournament, which runs Aug. 6-10 in Lima, Peru.

Dungee finished second in the SEC in scoring at 20.5 points per game in 2018-19 and led 10-seed Arkansas on an unprecedented run to the SEC Tournament final in March. She scored a tournament-record 103 points in the Razorbacks' four games, which included upsets of No. 12 South Carolina and No. 15 Texas A&M.

Dungee was named second team All-SEC prior to the league tournament and became only the second Razorbacks player to be selected to the all-tournament team.

The invite, in Neighbors' mind, is validation that Dungee is among the elite in the college game.

"To me, this is the pinnacle of being recognized by your peers - with your peers - by people who want the best for the entire country," he said Wednesday. "There's something special about your uniform being red, white and blue. ... It’s evidence that, as a player, you've made sacrifices to put you among the nation's elite.

"We all knew this already about her. We all saw the talent at a young age, but Chelsea didn’t waste that talent like so many others have. She went the exact opposite direction and got even better."

Dungee, who has previous USA Basketball experience having competed for a spot on a U16 team, said she's worked hard to put herself in this position. After transferring to Arkansas from Oklahoma following her freshman season, Dungee changed her diet and lost 35 pounds, which helped her become a more versatile player.

"It's paid off. I think everyone can see that," Dungee added. "To get this opportunity makes me smile and feel good about the work I do put in."

Tuesday evening, Dungee tweeted a photo of her official invitation, which was met with tremendous feedback. As of Wednesday afternoon, the post had been liked more than 800 times.

But the first person Dungee told of her invite was her mother, Chi.

"(My family) thought it was even a bigger honor to be recognized again and represent your country twice," she said. "They're supportive and happy for me whether I make the team or not.