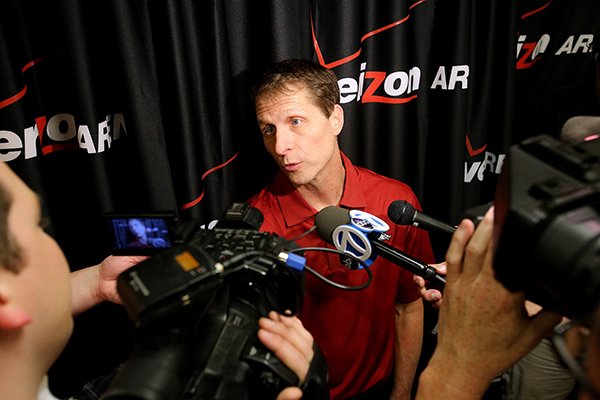 The University of Arkansas became the sixth school to extend a scholarship offer to sophomore guard Trey Alexander this week.

Alexander, 6-5, 185 pounds, of Oklahoma City Heritage Hall announced his offer from the Hogs on Tuesday. He also has scholarship offers from Oklahoma, Oklahoma State, Texas A&M, SMU and Tulsa.

He stood out while playing in The Warmup basketball tournament in Northwest Arkansas over the weekend by showing a nice overall game while playing for 16-Under Team Griffin.

Team Griffin Coach Kellen McCoy learned of the offer from Nevada assistant Anthony Ruta, who was an assistant to new Arkansas Coach Eric Musselman with the Wolf Pack. Ruta is in Fayetteville but has not been officially named as a member of the staff.

"It meant a lot that [they] would give me an offer ... the way they helped players get to the next level impresses me and how the coaching staff knows how to win with what they have each year," Alexander said.

Former Arkansas track and field standout and Olympic triple jump gold medalist Mike Conley's wife Regina's niece is Alexander's mother. Alexander said having the Conley family in Fayetteville is a plus for Arkansas.

"Definitely, it'll be just like home having family I know," Alexander said.

Conley, who's son Mike Conley Jr. is a point guard for the Memphis Grizzlies, watched Alexander in The Warmup and liked what he saw.

"I was really impressed with his composure on the court and his ability to shoot off the dribble and see the floor," Conley said.

"He told [me] that it's a very beautiful university and the people there are wonderful," Alexander said.

"Trey is a special talent on the wing," Reynolds said. "The skills to be a high major NCAA D1 player are undoubtedly there. What sticks in my mind about Trey is not only the skills he posses, but the clutch factor. Trey wants the ball in his hands in the biggest moments."

Alexander plans to make his way make to Fayetteville to visit the Razorbacks.

"Definitely will get something set up to where I can get down there," Alexander said.

Cylla, 6-7, 215 pounds, of North Carolina-Wilmington averaged 13.7 points and 4.6 rebounds while shooting 42 percent from the field and 31 percent on three-pointers last season.

He started his college career at Florida Atlantic after starring at Lake Worth Christian in Florida. Cylla averaged 7.1 points and 3.4 rebounds as a sophomore while starting all 26 games. He started 24 of 33 games as a freshman and averaged 9.7 points and 3.5 rebounds.

He transferred from Florida Atlantic after his sophomore season and sat out the 2017-18 season.