What to expect from grad transfer Jeantal Cylla 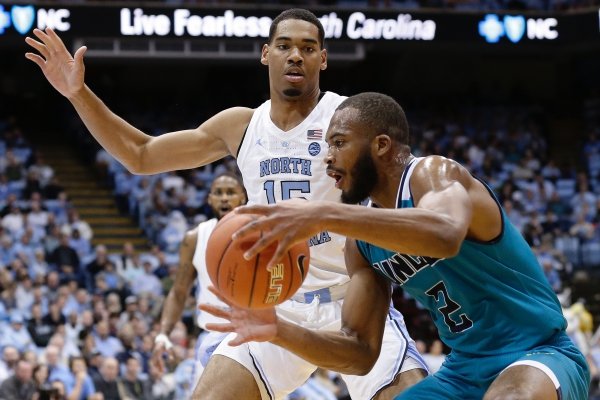 Eric Musselman's first commitment as coach of the Razorbacks has the potential to pay big dividends.

Saturday, he secured the pledge of former Florida Atlantic and University of North Carolina-Wilmington forward Jeantal Cylla, who, at 6-7, 215 pounds, is the kind of player who can bolster Arkansas' frontcourt.

Cylla averaged 8.5 points over 63 career games - 55 starts - at FAU prior to transferring to UNCW. After sitting out the 2017-18 season, he scored a career-high 13.7 points per game, finishing second on the team in scoring and rebounding behind Seahawks forward Devontae Cacok, who averaged better than 15 points and 12 rebounds.

Cylla shot 42.7 percent and 31.1 percent from 3-point range last season. He was a basketball standout his senior year of high school, too. He averaged 27 points, 11 rebounds, earned all-state honors and ultimately signed with FAU.

Cylla was also selected to play for the Haitian National Team last June.

Alex Riley, who covered UNCW athletics from Oct. 2016-Feb. 2018 for the Wilmington Star News, offered WholeHogSports some insights on Cylla's game on Monday.

• Multi-faceted forward. Shortly after Cylla announced his commitment to Arkansas, college basketball insider Jeff Goodman offered this analysis on Cylla from an anonymous coach: "Face-up 4-man. Range to 3. Runs court. Ability to finish off the bounce.”

Riley concurs, stating he is the definition of a stretch 4, which is music to many Arkansas fans' ears. The Razorbacks have ranked 346th or worse nationally in terms of percentage of team points from the 4 spot in three of the last four seasons, according to KenPom analytics.

"He's a big guy capable of going inside off the dribble, or spotting up from long range," Riley said. "For a guy his size, he's a pretty good ballhandler. In a lot of press situations, he would actually be the outlet guy bringing the ball over the timeline before getting it back to a guard. He's a decent 3-point shooter, but his bread and butter is the baseline jumper from about 10-15 feet."

The 10-15 foot jumper being a bright spot in a forward's game should be more than welcomed by Arkansas basketball followers. Last season, Razorbacks forwards not named Daniel Gafford combined to shoot 30 percent on midrange jumpers. Another area of his game fans will love: free throw shooting. Cylla shot 84.3 percent from the line a season ago. That mark would have ranked first on last year's Arkansas team by four percentage points.

• OK defender. One aspect of Cylla's game I was curious about was the defensive end. UNCW was, statistically, one of the worst defensive teams in all of college basketball last season. As a team, it allowed 114.7 points per 100 possessions, which ranked 339th.

Riley said Cylla isn't a shotblocker by any stretch, but can alter shots with his length.

"He does OK at changing a driver's course on penetration," he added, "but again, everything was so bad for everyone it's hard to say if anything was really good or bad."

According to SportsReference, Cylla's personal defensive rating - points allowed per 100 possessions - was fourth best on the team at 116.3. In his sophomore season at FAU, that figure was 107.2. It's not a stretch to believe that number will improve playing alongside a more talented cast of players.

• Team-first guy. If you watch postgame interview videos posted on this site and found yourself listening to Isaiah Joe at some point during last season, it's likely you heard Joe say he would much rather have not scored in an Arkansas win than 20-plus in a loss. Cylla is the same way, and a very optimistic person and player.

UNCW lost 10 of its last 12 games and, as one could imagine, it wore on Cylla, Riley added, but he remained a trustworthy teammate and was easy to deal with in interview settings.

"He always talked about correcting the little things after a loss so that the team could get a win," Riley said. "For a guy who has been through all he has - now 3 schools, the Haiti national experience - he's pretty level-headed."

• Can be inefficient offensively. While the thought of having a true stretch 4 on the roster is very, very intriguing for the Razorbacks in 2019-20, it should be noted Cylla can struggle on that end and be inefficient. To be fair, most can. Watching a handful of UNCW games from last season, Cylla has a tendency to take tough, contested jumpers. Again, he'll bury some because he's a talented player, but those aren't the greatest shots - make or miss.

In 2018-19, UNCW averaged 1.04 points per possession in his 1,655 offensive possessions versus 1.07 PPP over the 735 trips in which he sat. The Seahawks shot 33.3 percent from 3-point range with him on the floor, but were nearly five percentage points better there when he wasn't on the floor. Cylla hit multiple 3s in eight games last season, but was far from consistent beyond the arc. He opened the year missing his first 11 attempts from distance.

Cylla shot under 42 percent from the floor on nearly 12 shots per game in Colonial Athletic Association play.

• OK defender. There's an upside and downside to being an OK defender - you do some things well, and some not so much. In watching game film, Cylla isn't opposed to taking charges, but, Riley said, despite his length and quickness, it never felt as if he forced many turnovers. Cylla has finished with more than two steals only one time in three seasons.

Cylla has plenty of bounce in his legs, but didn't rebound particularly well, Riley said. The consensus on the UNCW beat was that Cylla would be a bigger presence on the glass, and that never really came to fruition.

"Also, many of us saw in practice an explosive, to-the-rim mentality that resulted in some thundering tomahawk dunks. Those never translated to happening in games," he added. "There was a thought early on that he just didn't have his legs under him, but it seemed to carry on throughout the season. ... And his rebounding can be lackluster."