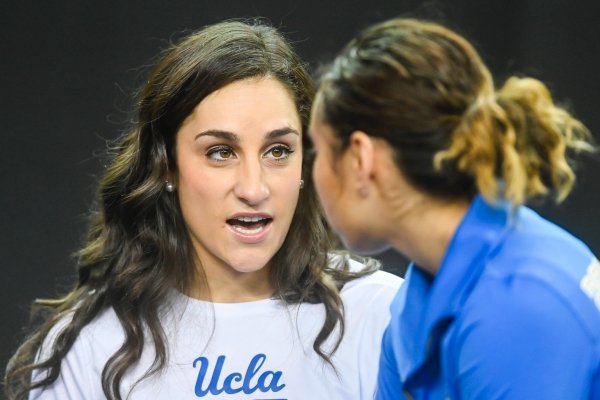 FAYETTEVILLE — The University of Arkansas decided to go young and splashy with its hiring of a gymnastics coach.

Wieber, who has spent the past six seasons in multiple roles at UCLA, will be officially introduced during a news conference Thursday afternoon at Bev Lewis Center on the UA campus.

“I am honored to be joining the Razorback Family as the head gymnastics coach at the University of Arkansas,” Wieber said in a statement announcing her hire. “Throughout my life, gymnastics has provided me some extraordinary opportunities, from traveling the world and competing for my country at the Olympics to coaching alongside one of the legends of our sport at UCLA. Those experiences have been invaluable to my growth personally and professionally while also preparing me for this role.

"I am excited about the future of Razorback Gymnastics and am looking forward to working together with our student-athletes to compete at the highest level of collegiate gymnastics.”

“As one of the world’s elite gymnasts and an assistant at one of the top collegiate programs in the country, she has already experienced more than many of us will in a lifetime," Yurachek said in a statement announcing the hire. "She has a maturity beyond her years and her experiences at the highest level of gymnastics will be a tremendous asset to the young women in our program. Jordyn has a great energy and passion, is an accomplished communicator and a demonstrated leader.

“It was clear from the beginning of this process, that Jordyn had a definitive plan to take our program to an elite level and wanted to be the head coach at the University of Arkansas."

Yurachek was in Fort Worth, Texas, for the NCAA championships last weekend, where the Bruins finished in third place behind national champion Oklahoma and LSU. Wieber coached the floor exercise for the Bruins, who were third in that event at the finals with a 49.3, led by a 9.95 from Katelyn Ohashi.

Wieber will become only the second sole head coach the program has ever known, replacing Mark Cook, who announced his retirement after the Razorbacks’ third-place finish at the NCAA Baton Rouge Regional earlier this month.

Mark and Rene’ Cook were the Razorbacks’ original co-coaches who began the program in 2001 before starting competition in 2003.

"For the past 17 years, Mark Cook built the Razorback gymnastics program from the ground up," Yurachek said. "I am confident that Jordyn will not only build on that foundation but will also serve as a recognizable face for our program and for the sport of gymnastics.”

Wieber has risen through the ranks at UCLA, serving as team manager for three years prior to spending the last three as the volunteer assistant coach. She earned a degree in Psychology from UCLA in 2017.

Wieber is a decorated star in the industry, having won the ESPY’s Arthur Ashe Courage Award in 2018 as part of group of survivors of the USA Gymnastics’ sex abuse scandal for which physician Larry Nassar of Lansing, Mich., received a 60-year federal prison sentence in 2017. He was also sentenced to up to 175 years in state prison in Michigan.