Arkansas vs. Tennessee: How to watch and listen, forecast, pitching matchups, team comparisons 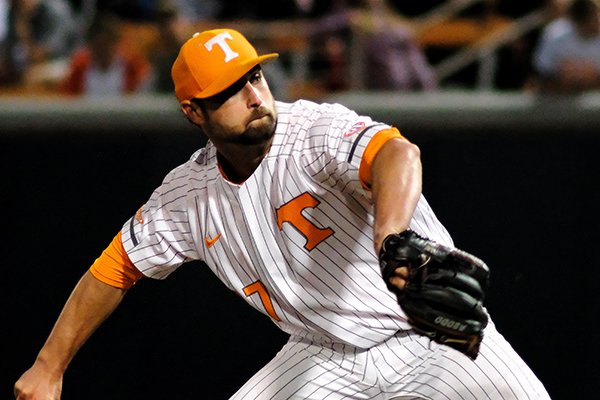 LAST MEETING Arkansas and Tennessee split two games in Knoxville, Tenn., in May 2017.

TELEVISION Games 1 and 2 will air on SEC Network-Plus, and Game 3 will be televised by SEC Network. All three games can be accessed on the ESPN app and ESPN3.com. (Carrier login required).

NOTABLE Tennessee is the fifth consecutive top 20 team that Arkansas will play in conference play. The Razorbacks were 7-5 against Ole Miss, Auburn, Vanderbilt and Mississippi State….Tennessee coach Tony Vitello spent four seasons as an assistant coach at Arkansas from 2014-17. This weekend’s games will be Vitello’s first against Arkansas since he took the Tennessee job following the 2017 NCAA regional….Tennessee outfielder Alerick Soularie is batting a team-high .374 with 10 home runs and 30 RBI. Soularie, a sophomore, originally signed with Arkansas in 2016, but spent his freshman season at San Jacinto Junior College….Arkansas enters the series with a half-game lead over Texas A&M in the SEC West. The Razorbacks are one game back of Georgia in the overall SEC standings. Tennessee won two of three against Georgia earlier this month….Arkansas has won 20 of the past 23 three-game series at Baum-Walker Stadium….Tennessee coach Tony Vitello and Arkansas pitching coach Matt Hobbs were college teammates at Missouri….Arkansas volunteer coach Taylor Smart spent two seasons playing at Tennessee after transferring from a junior college….Tennessee hitting coach Josh Elander was Arkansas’ volunteer coach in 2017.