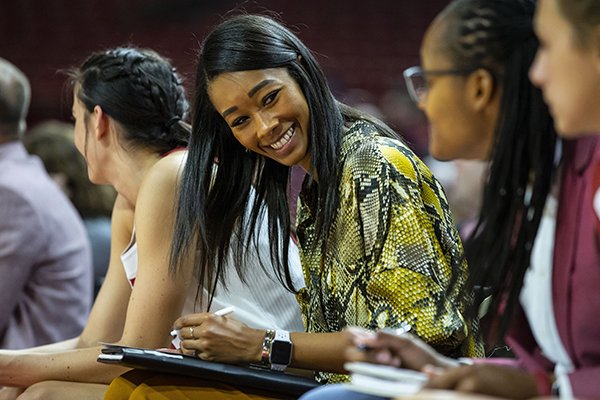 Arkansas assistant coach Lacey Goldwire is shown during a game against Arizona State on Sunday, Nov. 18, 2018, in Fayetteville.

Goldwire, who spent the last two seasons with the Razorbacks under Mike Neighbors, was hired as an assistant coach and recruiting coordinator at Tennessee, the school announced Thursday. She joins former Lady Vols standout Kellie Harper’s first staff.

“We at Arkansas did everything we could to keep her,” Neighbors told WholeHogSports. “We matched the offer that Tennessee made. She’s wanted that since she was a little kid and it’s a chance for her to go do it. When you hire good people, eventually people are going to come calling.

Harper was hired on April 9 to replace Holly Warlick, who was fired March 27 following a 172-67 run in seven seasons at Tennessee. The Lady Vols did not advance past the second round of the NCAA Tournament in her last three seasons.

"We are very excited to be adding Lacey Goldwire to our coaching staff," Harper said in a release. "Lacey is a person of high character and has a wonderful personality. She is a terrific recruiter and has knowledge and experience in the SEC that will prove to be very beneficial for our program."