State of the Hogs: Arkansas-turned-New York columnist knows what lies ahead for Anderson 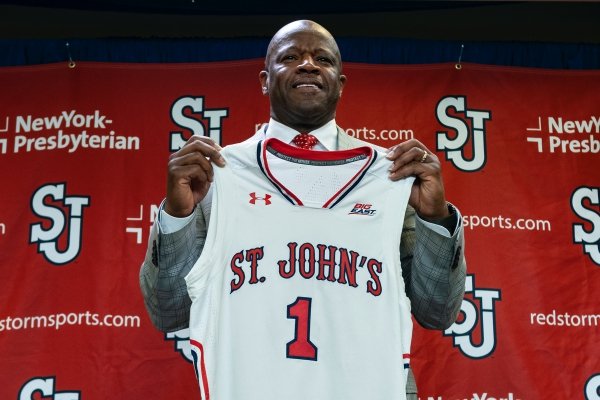 Mike Anderson holds up a jersey after being introduced as the new St. John's men's basketball coach during a news conference, Friday, April 19, 2019, at Madison Square Garden in New York. Anderson was hired as Red Storm coach on Friday after he was fired by Arkansas in March 2019. (Craig Ruttle/Newsday via AP)

The premise for the call was to discuss what Mike Anderson was facing in his new job as St. John’s basketball coach.

That was front and center in the 45-minute phone call with Mike Vaccaro, but really the reason was just to catch up with one of my favorite contributors from the early days of Hawgs Illustrated.

Vaccaro has been the lead sports columnist for the New York Post since 2002. He’s one of the great ones in our industry.

I’ll take you back to the summer of 1992 when Hawgs Illustrated was – as it is now – a 48-page magazine. Yes, there are some special issues like next month’s football preview that have grown to well over 100 pages.

But in that first year, the magazine was never more than 48 pages. And, it was as they say out West, nothing but wide open spaces. The magazine contained few ads, so there needed to be 10-12 features to fill the pages.

Long story short, I needed help and the longer the story the better. Among the first to step forward was a stranger, a new man to those covering Razorback Nation. Vaccaro had just arrived in Fayetteville and was newly appointed sports editor of the Northwest Arkansas Times.

As far as his talent, it was love at first sight. His copy was perfect. It sang as I read him in the Times. And, he was a willing free lancer for Hawgs Illustrated. When I told him that there was no restriction on the amount of words, Mike told me then, “Don’t tell me that. I’ll write a book.”

The first story Mike sent the magazine was a deep dive with Jason Allen, the returning quarterback in the middle of rehab from a serious knee surgery reconstruction. It was an important story because the team’s fortunes for 1992 hung with Allen’s comeback.

It probably ran close to 3,000 words, but it was so good. You felt like you were beside Allen as he did leg curls for endless hours and then applied the ice so he could do it again the next day, trying to rebuild that leg. You finished wanting more. It was the kind of writing that has earned Vaccaro more than 50 awards.

Alas, Allen was not the same as a runner or passer after that surgery. Ultimately, he was replaced by Barry Lunney Jr., with Allen later moving to wide receiver to get just a little playing time as he finished his eligibility in 1993.

Back to the phone call to Vaccaro this week, I was fascinated to hear him explain what Anderson would inherit at St. John’s – still undetermined with players in the transfer portal – and the media scrutiny that awaits. Vaccaro grew up on Long Island and knows the history and the pitfalls of the city’s sports teams.

It’s always been my view that the two toughest media markets in the world are New York and Boston. It’s probably true, Vaccaro confirmed, but not how it pertains to Anderson. There are too many pro teams to soak up the vast media in New York. What were once vast staffs for all those great newspapers in the city have been reduced by huge amounts with shrinking advertising and page counts.

That won’t pertain to Anderson at St. John’s, Vaccaro insists. New York is just not “a college market.”

Vaccaro is highly interested in what happens to Anderson at St. John’s, mainly because he knows him from his Arkansas days.

“Those are some of my favorite days of my life,” Vaccaro said of his two-year Fayetteville stay from 1991-92.

And, he loved getting to know Nolan Richardson, recalling the day at a benefit golf tournament at Paradise Valley when the legendary Arkansas coach predicted greatness for Anderson.

Richardson pointed to Anderson on the driving range, then predicted success “when someone gives him the chance.”

Anderson gets his fourth chance to coach a Division I basketball team at St. John’s. There has been spotted success there in the long history of the program, but none really since 1992 when Lou Carnesecca retired. The Johnnies went to the Final Four in ’85 under Carnesecca.

Vaccaro thinks highly of Anderson and his chances at St. John’s. He considers all of his body of work (Alabama-Birmingham, Missouri and Arkansas) when he says “if he does 75 percent of that, they will build a gym at St. John’s and name it for him.”

Partly, that’s in consideration of what’s happened at St. John’s, a fall into the abyss of college basketball and the city’s standing.

“It’s been a graveyard for the last 30 years,” Vaccaro said. “I can remember Nolan telling me that sometimes the job is to clean out the graveyard.”

That’s sort of where Anderson is right now and the administration and fans know it. No one will be in a rush to ambush Anderson as he rebuilds.

“I don’t have any scientific research to back that up, but I think that’s where it is right now at St. John’s,” Vaccaro said. “I think people are cynical here, but they also are impressed with who Mike is and what he’s done.

“What you must remember, this is not a college market. There are nine pro teams. I think St. John’s ranks above the (NHL) Islanders, Devils and (NBA) Nets, but that still puts them sixth best on the totem pole as far as getting coverage.

“As far as during basketball season, the Knicks are tops, even when they are down like now. The talk now is that they might add Kevin Durant. The coverage of the Knicks dwarfs what St. John’s gets. And, if the Knicks get good, St. John’s will be invisible.”

There’s an asterisk there.

“The only time really that the media here got interested in St. John’s otherwise in the last 30 years was with scandal," Vaccaro said.

“That happened with Mike Jarvis. He was on the griddle, but not because of wins and losses. His players were doing things off the court to bring scrutiny.

“When that happens, the media is there. But that won’t happen with Mike because of the type of program he runs.”

It won’t be near the kind of coverage Anderson saw at Arkansas when there could be 30-40 people at a midweek news conference to preview a game. The stage in the interview room might be filled with five or six TV cameras. There might be four or five from the same media outlet.

“At one of those kind of media conferences at St. John’s, there might be one TV guy and two or three from a newspaper,” Vaccaro said. “And, that’s when they are about to play Georgetown or Villanova. The major papers don’t even go on the road.”

Vaccaro said he did travel to see the Johnnies play Duke, but he said, “That was more to see Duke. I think sometimes guys covered them just for amusement. I don’t mean that bad, just that our editors weren’t making us go. I just love college basketball. What I’m saying is that Mike’s teams will be ignored before they feel scrutiny.”

There is interest from Vaccaro with Anderson at St. John’s.

“Oh, yes, for sure,” he said. “I really like Mike. And, it brings me back to my favorite times in my career, those two years at Arkansas. I just loved it.

“I got there at the height of it, the start of the championship run. I covered the end of May-Day, with Oliver Miller, Todd Day and Lee Mayberry. I was there when Corliss (Williamson) got there.

“I knew they had something great building unless some of those guys like Corliss just stayed one year. I covered the game in the NCAA Tournament when he was a freshman and they lost to North Carolina in the tournament (in East Rutherford, N.J.). Carolina went on to win and you had this feeling that the Arkansas guys felt like they had a chance to do something great going forward. I did.

“Those guys had no fear. They won one championship and came really close to winning another. I was pulling for them. Like I said, I loved my time at Arkansas and have such fond memories of everyone.”

OK, the feeling was mutual. I came close to asking Mike Vaccaro if he’d write this story for me. But he’s kind of busy. He’s with the New York Yankees covering their first West Coast swing of the baseball season.

When he returns, he promises to go see Anderson at St. John's.

“I missed the introduction press conference,” Vaccaro said. “It was Good Friday and I was spending time with family.

“Mike and I texted back and forth. I’ll be excited to see him.”

They will probably talk about his days with Richardson. Vaccaro will probably remind him of that day when Anderson was pounding balls on the driving range and a prediction was made

It reminds me of the first time I read Vaccaro. I knew good things were just around the corner and that there wouldn’t be too many more chances for his work to appear at Hawgs Illustrated.