Down to three for Fayetteville's Sasha Goforth 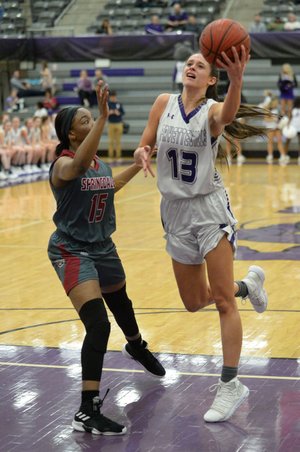 NWA Democrat-Gazette/ANDY SHUPE Fayetteville's Sasha Goforth (13) takes a shot in the lane over Springdale's Ashley Pegue (15) Friday, Jan. 18, 2019, during the first half of play in Bulldog Arena in Fayetteville. Visit nwadg.com/photos to see more photographs from the games.

Fayetteville guard Sasha Goforth has accumulated approximately 30 scholarship offers, but she's narrowed her list to three schools and is closing in on a decision.

Goforth, 6-0, has narrowed down the list to the University of Arkansas, Oregon State and Texas A&M. ESPN rates her a 4-star recruit, No. 4 guard and No. 21 overall prospect in the nation for the 2020 class.

She's enjoyed the recruiting process but is ready to focus on her three finalists.

"It's awesome and I'm blessed to have the experience, but it's kind of tiring while you're trying to do school and basketball and all this recruiting all the time," Goforth said."I don't have time to respond to everybody, so it's a lot easier now that it's narrowed down."

Goforth, who has a 3.7 grade point average, has several reasons for having the Razorbacks as of her favorites, including Coach Mike Neighbors.

"Arkansas is close to home, I have developed a pretty good relationship with the coaches and I like the players," Goforth said. "I love Fayetteville. It's been my home my whole life. Coach Neighbors is doing great with their program."

"I love the coaches," Goforth said. "I love the city. They have just a really good culture there, and I like every player on the team. They only recruit a certain type of player and I really like that about them, not to mention they're pretty good."

Her respect for Texas A&M Coach Gary Blair is key for the Aggies making the cut.

Goforth was named to the Arkansas Democrat-Gazette All-Arkansas first team as a junior while also being named the Gatorade Player of the Year after averaging 16.6 points, 5.3 rebounds and 2 blocks a game while shooting 38% from the field.

She's visited Neighbors' program numerous times, but will make an unofficial visit to Arkansas and Texas A&M before deciding her future school.

"So after that I think I have to decide," she said. "There's really not much else to seek out."

When it comes to her college decision, Goforth is debating whether to stay home or venture out.

"See that's what I don't know yet," Goforth said. "That's what I'm trying to figure out."

Her father Calvin is staying neutral about the process.

"He's been very clear that he just wants me to be happy," Goforth said. "He said he supports whoever I do."

Goforth has a good idea when she'll announce her decision.

"I'm thinking more in the fall," she said.