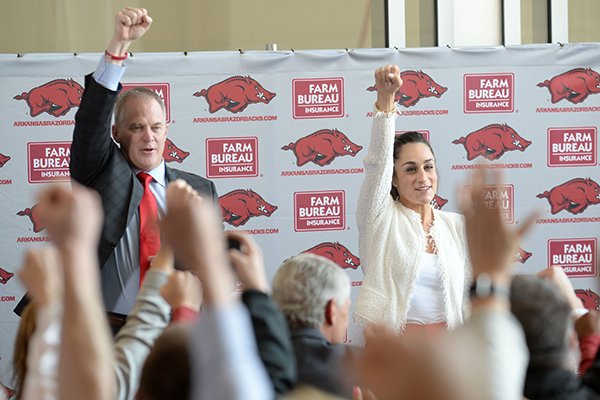 Newly hired Arkansas gymnastics coach Jordyn Wieber (right) calls the Hogs Thursday, April 25, 2019, alongside Hunter Yurachek, director of athletics, during a ceremony in the Bev Lewis Center for Women's Athletics on the University of Arkansas campus in Fayetteville.

The 23-year-old Wieber was introduced Thursday as just the second head coach in the 17-year history of the sport at Arkansas in a ceremony at the Bev Lewis Center for Women's Athletics.

Wieber, who had been a volunteer coach for well-regarded UCLA Coach Valorie Kondos Field the last three years, said she's ready for the challenge of running her own program.

"I've seen it all, from the club level to the elite level and now the college level," Wieber said. "I feel that experience has equipped me for this. I don't think age is a factor personally, and I'm excited to show everyone that although I'm 23, I'm prepared for this. I'm excited and ready to lead these women."

"When we first met with Jordyn I can tell you we were blown away," Yurachek said. "I went back to my computer to check, re-check and triple check that she was 23 years old. That's what it says on paper, but what you will learn as I quickly did, Jordyn has experienced more, in and out of her competitive gymnastics arena, than most of us will ever experience in a lifetime.

"While her birth certificate might say she is 23, she is wise and mature well beyond her years. As I talked to trusted colleagues and people within the gymnasts world, as hard as I pushed for even a little nugget of dirt, no one could come up with anything negative to say about Jordyn. She's ready and prepared to take on the challenge of being a head coach in the SEC."

Wieber was in charge of the floor exercise team at UCLA, which was ranked No. 1 in the nation the past two years.

"Although a volunteer coach, I was in charge of anything and everything that had to do with floor," she said. "I was in charge of preparing those athletes physically, mentally, emotionally, technically and getting them ready for competition all the while keeping them healthy at the same time."

Yurachek said he interviewed on-staff candidates in Jaime Armbrust, Garrett Griffeth and Courtney Griffeth, as well as a few external candidates before making the decision.

Wieber signed a three-year agreement that will pay her a university salary of $150,000, plus another $10,000 for speaking engagements and other appearances, according to documents obtained by the Arkansas Democrat-Gazette through a public record request. She can earn $15,000 in raises for making NCAA regional appearances, up to $30,000. Her first-year package is $20,000 less than her predecessor Mark Cook was making. Cook and his then-wife Rene, were the start-up coaches for the program in 2001 before the Razorbacks began competing in 2003.

Former Razorbacks defensive back Bobby Field, a long-time UCLA administrator and husband of Kondos Field, flew on the university jet back from Los Angeles with Yurachek, Wieber, Shaffer and Yamzon to attend Wieber's introductory news conference.

"When I asked Bobby to teach me how to call the Hogs, he said, 'I don't really know because I was always one of the Hogs being called,'" Wieber said.

Wieber said she was in awe of Fayetteville during her visit.

Some of her new students were in awe of Wieber during her competitive career, which featured the 2011 world all-around title and a team gold at the 2012 London Olympics with Team USA.

"She was definitely one of the gymnastics that I looked up to growing up. Being able to have this opportunity to be coached by her, I'm just so excited to get this going," Yamzon said.

Shaffer said from the moment the team was informed Tuesday night that Wieber would be their coach until they returned on the university jet on Wednesday it had been "just like a total rush of emotions. First of all excited she's going to be our head coach and our new leader, then it was, 'Wait, I watched her growing up,' like that's my era of gymnastics. That was an Olympic year where I followed everything."

Bobby Field said he's gotten to know Wieber well the last six years with plenty of in-home visits from her in Los Angeles.