Patriots take Froholdt in 4th round 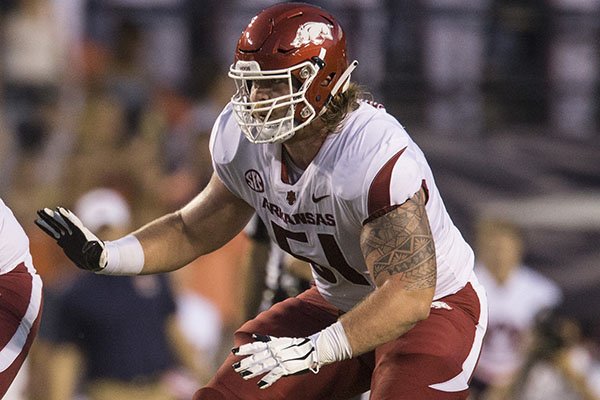 Arkansas offensive guard Hjalte Froholdt drops into pass coverage during a game against Auburn on Saturday, Sept. 22, 2018, in Auburn, Ala.

FAYETTEVILLE — Former Arkansas offensive lineman Hjalte Froholdt was selected by the New England Patriots in the fourth round with the 118th pick of the NFL Draft on Saturday.

Froholdt is the fourth Razorbacks offensive lineman to be drafted since 2014, joining Travis Swanson, Sebastian Tretola and Frank Ragnow, who was the 20th overall pick of the Detroit Lions in 2018.

A Svendborg, Denmark, native, Froholdt was the first Danish player ever invited to the NFL Combine and is the second from his country to be drafted. Kicker Morten Andersen was the first in 1982.

Froholdt originally signed with Arkansas in 2014 as a defensive lineman out of IMG Academy. He totaled three tackles in 10 games at defensive tackle as a freshman before transitioning to the offensive line during spring practice in 2016.

As an offensive lineman, Froholdt started the final 37 games of his Arkansas career. After starting each game at left guard in his sophomore and junior seasons, Razorbacks coaches moved Froholdt to center to begin the 2018 season.

Froholdt did not allow a sack in 440 pass-blocking snaps last fall, started all 12 games – nine at left guard – and graded out at 90.0, according to Pro Football Focus, good for the fourth-highest mark among SEC offensive linemen.

Froholdt is the fourth Arkansas player to be drafted by the Patriots since 2015. Former Arkansas head coach Bret Bielema was hired as a consultant to New England coach Bill Belichick last year. Bielema recruited Froholdt to Arkansas.