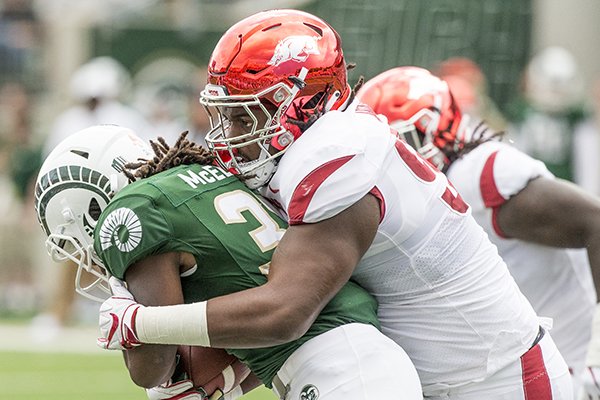 FAYETTEVILLE — Former Arkansas defensive lineman Armon Watts was selected by the Minnesota Vikings in the sixth round with the 190th overall pick of the NFL Draft.

Watts is the first Razorbacks defensive tackle drafted since Darius Philon was selected by the San Diego Chargers with the 192nd overall pick in 2015. He is the third Arkansas player taken in this year's draft along with Hjalte Froholdt (Patriots) and Dre Greenlaw (49ers).

Watts enjoyed a breakout season on Arkansas' defensive line as a senior, totaling 49 tackles, 8.5 for loss, and a team-high seven sacks - the most by a Razorback since 2015. He also forced three fumbles, including one in Arkansas' wins over Eastern Illinois and Tulsa.

The St. Louis native helped lead the Razorbacks defense to its first shutout since 2014 against Tulsa. Following the game, Watts was named the Crip Hall Award winner, given to the most outstanding senior on Homecoming.

Prior to last fall, Watts did not have a sack in 114 career snaps and recorded only seven tackles.

Watts recorded Arkansas' top overall defensive grade by Pro Football Focus at 85.6, posting eight games with a grade over 70.0. He earned National Team of the Week honors after finishing with five tackles, 1.5 for loss, and a forced fumble at Colorado State.