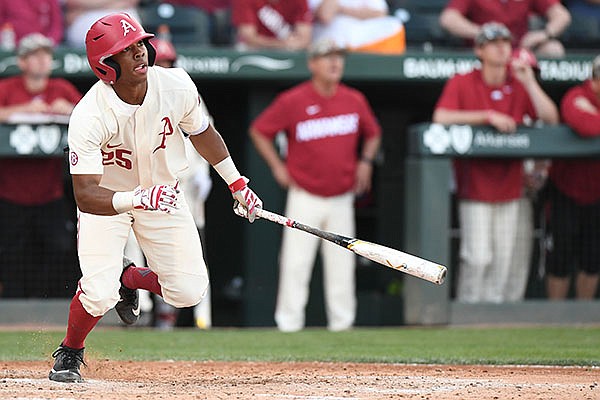 Arkansas outfielder Christian Franklin hits a home run during a game against Tennessee on Sunday, April 28, 2019, in Fayetteville.

FAYETTEVILLE — One of the characteristics that made Arkansas' baseball team so good in 2018 was its ability to adapt to whatever personality a game took on.

Need a low-scoring pitcher's duel? The Razorbacks could do it.

A high-scoring win? They could do that, too.

During Arkansas' seven-game SEC win streak that has left the No. 7 Razorbacks two games ahead of the SEC West and tied with Vanderbilt for the overall conference lead, Arkansas is beginning to resemble itself from a year ago.

Take this weekend's series against No. 18 Tennessee, for example.

On Friday, the Razorbacks found themselves in an unexpected shootout with the typically low-scoring Volunteers. But Arkansas twice answered big Tennessee innings to overcome separate three-run deficits and win 11-9 against the Vols' top-rated pitching staff.

On Sunday, Arkansas had to beat Tennessee at its own game. The Vols allowed only two runs through eight innings, and went ahead 3-2 with a pair of two-out base hits in the top of the eighth.

But the Razorbacks battled back and tied the game 3-3 on Christian Franklin's solo home run in the bottom of the ninth inning, and won 4-3 on Casey Opitz's RBI double in the bottom of the 10th. Both runs came against left-handed reliever Redmond Walsh, who entered the with a 0.35 ERA but pitched twice as long as he had in any other game.

Arkansas (34-11, 15-6 SEC) swept the series - its second home sweep of a ranked team in the last two weeks. In both sweeps, the Razorbacks took away the strength of the opposing team.

Mississippi State entered the series last week with the SEC's top offense, but was held to 154 points below its season batting average and to 17 runs below its three-game average. That was on a weekend that Arkansas started two freshman pitchers for the first time.

Tennessee entered with the nation's No. 1 team ERA of 2.68, but allowed 30 runs (29 earned) and 43 hits. That came despite the fact that the Razorbacks played the final two games without their leading hitter, Matt Goodheart.

In the late innings Sunday, Van Horn said he didn't say much to his hitters. He could hear them talking with each other in the dugout about what they needed to do to tie the game or win.

"It was good to hear," Van Horn said. "I just kind of stood over there and listened. I just wanted to see how they reacted.”

That kind of in-team leadership was a hallmark of last season's group and has been a pleasant surprise for Van Horn in 2019.

"It’s better than I thought it would have been because we have so many new guys - new guys playing, new leaders," Van Horn said. "We lost a lot of veterans last year and I can honestly tell you they didn’t know who to pick as captains (in the preseason)."

Now there is thought this team could match last year's team by securing a home regional, possibly even a top-eight national seed that would secure home-field advantage throughout the first two rounds of the NCAA Tournament. The Razorbacks exit the Tennessee series with the No. 3 RPI in college baseball, trailing only UCLA and Vanderbilt.

But you won't hear much of that talk in or around Arkansas' clubhouse, and especially not from its head coach. Van Horn stressed on multiple occasions following Sunday's win that his focus was on the upcoming midweek game against Grambling State in North Little Rock and the subsequent weekend series at Kentucky, not on the team's position in the SEC standings.

That tunnel-visioned approach might explain why the Razorbacks keep pulling out these wins. Arkansas has won nine of its past 11 in conference - all against ranked teams. Four of those wins have been comebacks, and two have been in extra innings.

“They don’t quit, and that’s the biggest thing,” Arkansas volunteer coach Taylor Smart said recently. “Baseball is the toughest game in the world. You can smoke a ball and do everything right and you’re out. Being able to flush it and move on and not give up, it’s been a pleasure to be part of that atmosphere. It comes from the top from Coach (Van Horn) setting the tone and the mindset of how we’re going to win, and it just trickles down to everybody.

“We preach that all the time, of playing the game harder than the opponent, no mater what.”

Arkansas is playing harder than its competition right now, and the Razorbacks continue to be one of the game's biggest surprises this year as a result.