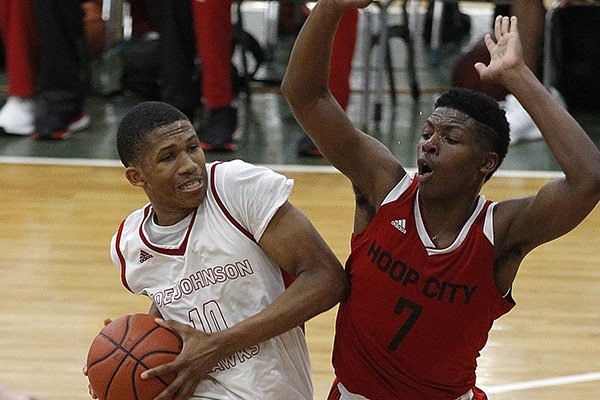 Terran Williams (10) of the Joe Johnson Hawks goes up during The Real Deal in the Rock basketball tournament on Sunday, April 7, 2019, at P.A.R.K. in Little Rock.

MANSFIELD, Texas — Aside from his obvious talent, the competitive nature of wingman Terran Williams is strong.

Williams, who is from Barton and plays AAU basketball for the 16-under Joe Johnson Arkansas Hawks, was visibly upset after the Hawks lost to Team Carroll in their mid-day game at the Adidas Gauntlet on Saturday.

“My competitiveness is high,” Williams said. ”I want to win every time, but you have to learn from your mistakes.”

Williams, 6-5, 180, has scholarship offers from Oklahoma State and TCU while drawing interest from Arkansas, Auburn and Memphis. The previous Razorbacks staff showed interest, and coach Eric Musselman has done the same.

“It’s great. I’m glad they have a new coaching staff and I hope they like my game,” Williams said.

He had 13 points on 4-of-8 shooting and 1-of-2 from the 3-point line in the Hawk’s 77-58 win over Team Loaded on Friday along with six rebounds. Williams had 13 points, two rebounds, three assists, two steals and a block shot in a victory over Garner Road in the afternoon.

Arkansas assistant Corey Williams was at the Hawk’s first two games and was joined by Musselman for the Garner Road contest.

“It means a lot,” Williams said. “I can show them what I can do on the court and I hope they offer me.”

Williams said getting an offer from the Razorbacks would mean a lot to him. He’s noticed Musselman's program being more active on social media.

“I’ve seen him posting practices. I like that,” Williams said. “I can see how he likes to play and how he coaches.”