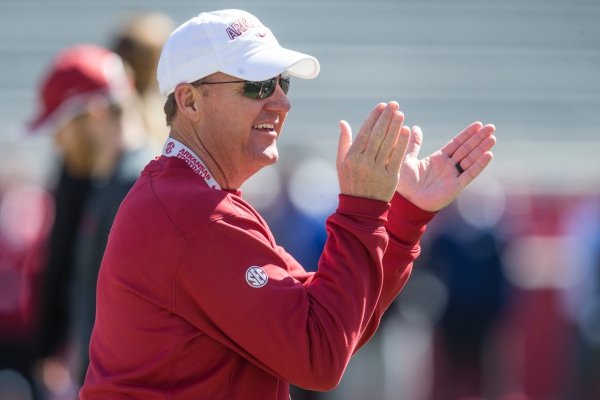 FAYETTEVILLE -- The University of Arkansas football team, as fit and healthy as it has been since Coach Chad Morris took the reins in late 2017, officially reports today at the Fred Smith Football Center in advance of the start of training camp Friday.

The Razorbacks are not expected to contend in the cut-throat SEC West as they return from a 2-10 season, but they will open camp with only minimal injury concerns, more competitive depth than in 2018 and improving team speed at key spots.

Arkansas, which opens on Aug. 31 against Portland State, will sport one of the youngest clubs in the SEC, with 51 freshmen, 23 sophomores, 26 juniors and 20 seniors listed on the official 120-man roster -- of whom 110 can participate in camp -- distributed this week.

"We're going to have quite a few playing for us," Morris said of the freshman class at SEC media days. "You can see this a young football team. We're going to really rely on the leadership of our seniors."

The Razorbacks have had the last week off after spending eight weeks in summer conditioning and also conducting player-led skills and drills.

There's a lengthy list of players returning from surgeries or other injury concerns, but only cornerback Britto Tutt, who has battled a knee injury the past couple of years, is expected to be strictly limited to begin the 25 practices heading into the opener.

Tailbacks Rakeem Boyd and Devwah Whaley, linebackers De'Jon Harris and D'Vone McClure, tight end Cheyenne O'Grady, receiver Mike Woods and others missed all or parts of spring drills, and incoming freshmen Treylon Burks and Jalen Catalon are coming off knee surgeries, but they have been cleared.

"Treylon Burks ... they still make him wear his knee brace when he does certain things, just as a safety precaution, but when he's out there running routes and doing all of that, he looks really good, really fluid," Arkansas strength and conditioning coach Trumain Carroll said.

The Razorbacks had key injuries to open camp last season, with sixth-year defensive back Kevin Richardson and starting left tackle Colton Jackson sidelined by injuries. Additionally, the Hogs were ravaged on their offensive front by injuries and illness in camp last fall and never had the kind of depth required of an SEC program.

After adding a big class of offensive line signees, the Razorbacks are adjusting their practice plans to run more offensive huddles and give the linemen better opportunities to develop.

"I think we have to be better this year. There's really no excuse for not showing improvement, unless the bus gets in a crash on the way to the first game," offensive line coach Dustin Fry said with a chuckle. "We should be in a position this year to have much better unit cohesion and be on the same page."

Camp observers will be watching position battles in several spots, but none will draw the attention like the quarterback job, where graduate transfers Ben Hicks and Nick Starkel are the top contenders.

The website BetOnLine has established Hicks as the 1-to-2 favorite to start the season opener, while Starkel has been installed as a 3-to-2 choice.

"I hope it comes down between all of them," offensive coordinator Joe Craddock said when asked if the starting quarterback job would likely come down to Hicks or Starkel.

"It means I've done a good job as a coach to develop a young guy in K.J. and continue to develop John Stephen," Craddock said. "It's an open race. You've got to go out and prove it on the field."

Craddock said he liked the way Hicks and Starkel worked together during the team-building exercise put forth by The Program, a group run by ex-Marines, at the end of summer conditioning.

"It's really cool to watch Ben and Nick work together like with that Navy Seal training we did last week," Craddock said. "While one of them was leading the other was being a good teammate and vice-versa. So it was very fun to watch. I told them that night, 'This is what it's going to take all year. We can't have one guy mad that he's not starting or not playing and it's a cancer to the whole team.' We can't have that."