New goals for Carter with Hogs 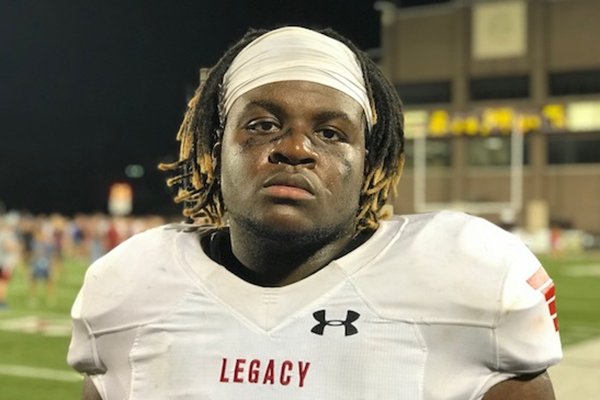 FAYETTEVILLE -- It all began on a piece of paper.

On his very first day as a freshman at Mansfield (Texas) Legacy High School back in August 2015, Taurean Carter wrote down five important, tone-setting goals for his high school football career.

Taurean Carter at a glance

NOTEWORTHY Born March 1, 2001, the son of Taurean Carter Sr. and Shantal Brown. … Made 18 sacks in three years for Legacy High School. … Played in nine games in 2018, and was in on 28 tackles. He had five sacks for a combined 24 lost yards. Eight of his tackles were behind the line of scrimmage. … Carter played in 15 games as a junior, compiling 63 tackles while making seven sacks. … Plans to major in sports management.

They were simple, yet incredibly lofty, and some were, in all likelihood, highly unattainable no matter how good a player he turned out to be. But Carter didn't care about the improbability of a 100% success rate. Like many young high school football players at that age, Carter just had big dreams.

So he wrote them down anyway, and, in doing so, set in motion his path to becoming a star defensive tackle at Legacy and eventually landing a scholarship at the University of Arkansas.

• Become the No. 1-ranked high school player in the country;

• Have every college offer in the country he could want;

• Receive an offer as a sophomore;

• Have As and Bs for his grades.

Nearly four years later, Carter received that same piece of paper from his coach in the locker room. Legacy's season, and Carter's senior year, had come to a disappointing end a few months prior, finishing 6-5 with a 41-6 loss to Frisco Lone Star in the first round of the UIL Texas 5A Division 1 playoffs.

Carter had long forgotten about the paper that he'd written his goals on, so he was confused when he saw it again. But, once he began reading, Carter realized there was a problem.

"I had five goals, and I achieved two of them," Carter said.

He had attained the grades he wanted, and he had been given his first offer at the end of his sophomore year in May 2017. It was from SMU, where Arkansas Coach Chad Morris had been in his third year in charge of the Mustangs.

But Carter wasn't the No. 1-ranked player in the country or an All-American, nor did he have every offer he wanted.

"I sat there, and I looked at the paper, and I had to call my father because I didn't know what to do," Carter said. "It just felt like I had failed myself."

Carter cried right there in the locker room, then made his father a promise.

"I told my dad, 'This will be the last time I failed myself,' that I ever have this feeling again," Carter said.

Carter now has new and even higher expectations for his college career.

A three-star prospect ranked as the No. 44 defensive tackle nationally, per 247 Sports Composite, Carter was a menace on the football field at Legacy. He finished with a school-record 17 sacks in three years, while also tallying 157 total tackles and 28 tackles for loss. He once played through an entire playoff game with a fractured ankle during his junior year.

"He's a very aggressive player who has a passion for the game," Legacy Coach Chris Melson said. "He gets after it. I think Arkansas has hit the jackpot with this kid.

"He has the ability to take a block and still bat the ball down. He just has a great awareness of where the other team wants to pass the ball."

Carter, who also was a track and field standout in the shot put, committed to Arkansas on Oct. 24, before signing with the Razorbacks along with fellow Legacy defensive tackle Enoch Jackson during the early signing period on Dec. 19. Safety Jalen Catalon made it three Legacy players in the Hogs' 2019 recruiting class when he signed with Arkansas on Feb. 6 during national signing day.

Carter ultimately picked Arkansas over Florida, Texas, TCU, Texas Tech, Oklahoma State, Michigan State, Wisconsin and others. Carter said he chose Arkansas largely due to his trust in Morris as a head coach.

He recalled a time during the recruiting process when he, Jackson and Catalon met Morris' parents at a basketball game. Morris' mother, Arlene, told the three that if they ever needed anything to reach out to her, according to Carter. That interaction "sealed the deal" for him.

That moment also helped solidify his faith in Morris, someone who was one of the first coaches to recruit Carter.

"I really do trust in him," Carter said. "Because if you're out there doing your job playing defense, then he's gonna do his, and his specialty is offense. He scores. That's what he does. And all he needs is a stop. So for a group of us to come around to a Division 1 program and change it all around to a winning program, a national championship-contending program, people [are] gonna turn their heads and be up here a lot more often than what they would be."

That process of trying to turn around the Razorbacks, who've experienced two consecutive losing seasons, begins Friday for Carter and the rest of his teammates with the opening of training camp, as Morris enters Year 2 in Fayetteville.

It could be a while before Carter finds himself in a game. But, through summer workouts, some teammates and coaches have already started to take notice of him.

"T.C. is a dog, man. You can look in his eyes and tell he's got it," Agim said last month at SEC Media Days. "I just can't wait for him to put it all together and show it to everybody else."

Said Arkansas defensive tackles coach Kenny Ingram: "What I love about Taurean [is] he does a great job of impacting his teammates. You can see him assume a leadership role. You can see him having a positive impact. The things the freshmen went through this summer that were challenging for them, you could see Taurean leading."

The 6-3, 288-pound defensive tackle's new goals for his college career are to start, win the Heisman Trophy and go to the NFL.

Yes, even win the Heisman -- something a defensive player technically has only done once in the award's history. Michigan cornerback Charles Woodson, who also played receiver and returned punts, won it in 1997.

"I told [my dad], 'We gonna be at the Heisman,'" Carter said with a grin. "And I know how impossible it is, but I'm gonna try everything in my power to make that possible."

Odds are Carter will likely never sniff the Heisman. Even Nebraska star defensive tackle Ndamukong Suh didn't win it when he was a finalist in 2009.

But Carter still won't let that improbability stop him from dreaming, nor will he stop expecting big things from himself on the field, no matter how astronomical those expectations may be.

It's the only way he knows how to operate.

"I definitely have big goals on this level, and I'll make sure I will fulfill them," Carter said. "I'm just really, really hard on myself. From where I come from, in order to provide for my family and be the best I can be, I feel like I got to do it all. Like, I'm the only one. For me to go to college and play at this level, I'm already basically here -- I just got to take one more step to get to where I want to be at."