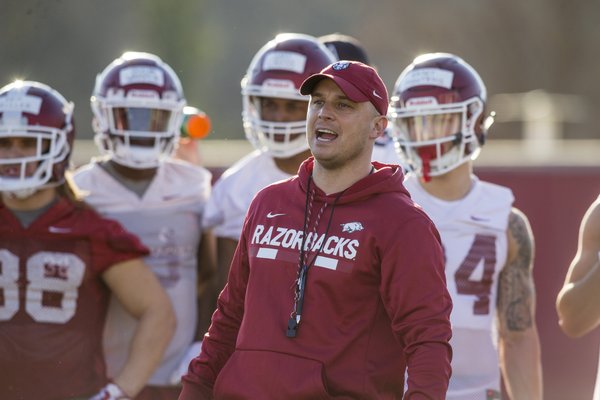 It’s often said that recruiting is the lifeblood of any program, but that would seem especially true in the case of one that is trying the change the narrative like Arkansas.

The Razorbacks have won just six of their last 26 games and just one of their last 16 SEC games, something that got one coach fired and another hired.

Chad Morris, given the reins of the program when the higher-ups decided that it was time for Bret Bielema to move on after six years, is taking his best shot in year two after being left what was simply a train wreck.

While the Razorbacks (2-10) didn’t win enough on the field last season, Morris and his staff still did remarkably well off the field while landing 11 4-star prospects and a class that was in the top 25 nationally.

“It takes a village; we have a village, and offensively we have an unbelievable staff,” Stepp said. “We are freaking relentless.

“My kids (recruits) hear from me every day. Whether it is the last thing I do before I go to sleep or not, I let them know, ‘I am thinking about you, I love you and we’ll catch up tomorrow.’”

Morris makes a clear point to his assistants about contacting recruits daily.

“If you ain’t talking to them, then somebody else is, and that is one thing that Coach Morris preaches to us,” Stepp said. “We take a lot of pride in just building relationships.

“You can’t fake family because these kids can see right through it. We try to let them hear from us everyday and just be relentless.”

Arkansas defensive backs coach Mark Smith is excited about progress in building the 2020 class. The Razorbacks entered the week with 14 commits, the same number it had a few days before preseason camp started last year.

“I think it is going great,” Smith said. “I think we have been very diligent and thorough with the guys that we have evaluated and that are committed to us.

“I think there is also an element to what we do with the patience game. I know this time last year — and we can talk about them because they are here now — but we were not even on the radar of (2019 defensive back signees) Devin Bush and Greg Brooks at this time last year.”

Bush and Brooks both enrolled in January and are expected to see significant action as freshmen.

“Devin had released a top three, and we weren’t in it, and we weren’t really in it with Greg either, but we were in it for the long game with these guys and just hung on and watched things work out,” Smith said.

If the season ended today, Arkansas would sign 20 players or less in the 2020 class per Smith.

“That is always a moving target,” Smith said. “If it were today, I would say right around the high teens or right around 20. Our roster is really backfilled right now, and that’s a good thing because we have a lot of youth, and they are improving and doing things we want them to do.

“We have used up all of our initials, but we have some room where we can put some guys on (scholarship) during camp as coach always likes to do.”

Smith does not want to use all scholarships too early.

“I have always been an advocate of you don’t want to fill up too soon because there are a lot of good players out there that we have relationships with, we just stay the course on that and if you are there at the end you can get them,” Smith said.

“It is not necessarily trying to get as many commits as you can early on as it is to getting the right guys at the right time. I really think this class will be better than the last class when all is said and done.”

That would be something since last season’s class was ranked 23rd nationally by 24/7’s composite rankings while the 2020 class is at 30 per 24/7.

“If we are doing things right, you are getting better with each group,” Smith said. “You are thinking when you are recruiting, are these guys better than the ones you have on your team right now? If the answer is yes, go get them and keep improving.”

Dudley E. Dawson can be reached at ddawson@nwadg.com .