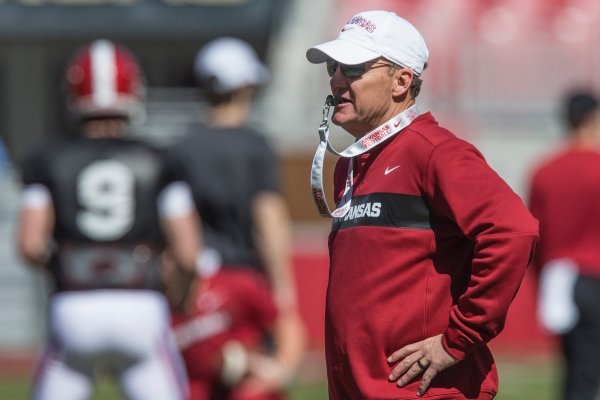 FAYETTEVILLE -- The University of Arkansas begins its 126th year of football, its 110th with a Razorback mascot, its 28th as a member of the SEC and its second under Coach Chad Morris with the opening of training camp tonight.

The Razorbacks will conduct the first of 25 preseason practices allowed by the NCAA beginning at 6:15 p.m. The temperature is predicted to be 77 degrees, with a 10 to 15 percent chance of rain when the 110-man roster hits the practice fields in helmets and shorts.

What 110-man roster has 25 practices prior to season opener

Arkansas will get in four days of work, including a couple in partial gear, before donning the full pads on Wednesday. Until school starts Aug. 26, the Razorbacks can stuff the daily calendar with film study, scheme sessions, walk-throughs, practices and recovery, though the old-fashioned two-a-days (and sometimes three-a-day) approach no longer applies.

Starting jobs are to be earned at nearly every position group, though the most scrutiny will accompany the quarterback race (likely between graduate transfers Ben Hicks and Nick Starkel), the receiving corps, the punting job and a couple of spots on defense. A roster bulging with 51 freshmen is likely to produce a wave of inexperienced players pushing onto the two-deep depth chart.

Arkansas has been picked last in the SEC West among voting media members at SEC media days after a 2-10 season that included an 0-8 run through the conference. Morris had only one assistant coaching job turn over -- Kenny Ingram replacing John Scott Jr. as defensive tackles coach -- and the Razorbacks' staff bolstered the roster with the No. 23 signing class in the country.

• Who will win the starting quarterback job?

If it's not one of the graduate transfers, it'll be an upset.

Ben Hicks enters camp with an edge in experience in this offensive scheme, as well as with the surrounding talent, having gone through spring as the first-team option ahead of redshirt freshman John Stephen Jones.

However, Nick Starkel's bigger arm opens up more downfield options, and the system he ran his first two years at Texas A&M is very similar to the Morris-Joe Craddock offense.

If the coaching staff plays both the veterans in early games, it has a better feel to it than the back-and-forth quarterback play between Ty Storey and Cole Kelley through the early portion of last year's slate.

• Will the defense make an improvement?

In Year 2 of the John Chavis defense, more guys should be reacting and running fast as opposed to thinking.

"The guys understand what we're asking of them and they understand the scheme," defensive backs coach Ron Cooper said. "If you understand the scheme, you don't tie their brains up and you can run and play fast. As I've said, it's up to us to get them taught and not mess them up, just let them play and turn them loose."

While the unit lost veteran contributors like Dre Greenlaw, Randy Ramsey, Armon Watts, Santos Ramirez and Ryan Pulley, the carryover for a second year in the scheme should allow the Razorbacks to improve on sacks, takeaways, impact plays, scoring and total defense.

• Can the offensive line make a substantial jump?

The improvement of this group is a key for improving the win total because it impacts every other area of the team. A stronger front line will keep the offense on the field longer -- meaning less pressure on the defense -- and will improve field position for the kicking game.

Clary must improve the quality of his snaps in addition to being a more physical center. He received high marks for his leadership skills during the summer. A healthier Jackson, plus the presence of Myron Cunningham, should improve the play at left tackle.

The right side will feature new starters in either Dalton Wagner or Noah Gatlin at tackle and probably Shane Clenin at guard, so there will be a transition period.

• Will special teams be improved?

With Barry Lunney Jr. now holding the title of special teams coordinator, they should be. Connor Limpert's accuracy as a field goal kicker already puts him in solid company at Arkansas, and another year at his level of production could put him in the record books.

The Razorbacks only had a couple of strong punting games last year, otherwise they were outperformed on a weekly basis, and sometimes -- like at Colorado State -- in an embarrassing fashion.

The coverage units gave up touchdowns in three consecutive games -- North Texas, at Auburn, vs. Texas A&M -- so there's plenty of room to improve.

The return game features a couple of veterans with good credentials in DeVion Warren and Stewart, but they need more creases to operate with this fall.

• Is there enough depth in the secondary?

This is a question that will more play out through the course of the season, but the knee-jerk reaction is maybe.

The two-deep at the top five positions in the secondary would very likely have one upperclassman -- Curl, a junior safety -- to open camp. So that's a lot of snaps on the shoulders of young players like corners Brown, McClellion, LaDarrius Bishop, Devin Bush and Greg Brooks and safeties Foucha and Myles Mason.

"I think ... depth, it's going to be a big issue," Chavis said. "We have some young guys. Can we get them ready to play as coaches? Like I said, same thing at linebacker."

Said Cooper, "We're young but there's talent back there. The guys are willing learners. The guys are great workers with great attitudes. That's all you can ask."

• Can the Razorbacks exploit their above-average depth at tailback?

Position coach Jeff Traylor won't complain about having veterans Devwah Whaley, Boyd and Chase Hayden backed up by returning versatile speedster T.J. Hammonds, freshman A'Montae Spivey and converted cornerback Jordon Curtis. Traylor also knows the tailbacks spend lots of time in the training room over the course of a season, so it's better to operate from a position of strength.

Keeping the standouts healthy and fresh to try to close out games in the fourth quarter is imperative. Having a dependable running game would be a huge asset in trying to make play-action and downfield passes more effective in this budding offense.

• Will Harris get help at linebacker?

Chavis sounds determined to limit Harris to 55 or so defensive snaps per game, which means versatile Grant Morgan has to be ready for 20-plus snaps at the middle linebacker spot in addition to whatever other work he might earn. Also, Pool, Hayden Henry, Giovanni LaFrance, Andrew Parker, Deon Edwards and Zach Zimos must know the system and play well enough to merit having Harris off the field to take a blow.

• Who will emerge to keep defenses from swarming O'Grady at tight end?

It's imperative Arkansas is dangerous enough with go balls and other deep routes to keep O'Grady from being bracketed and squeezed. That means speed players like Jordan Jones, Stewart, Mike Woods and others threaten safeties. That means Grayson Gunter and Hudson Henry make two tight end sets hard to defend. It also means Trey Knox, Shamar Nash and the other newcomers contribute to the wideout unit and help keep defenses honest. If O'Grady is allowed to square off against frequent man coverage from linebackers and safeties he should have a bountiful season.