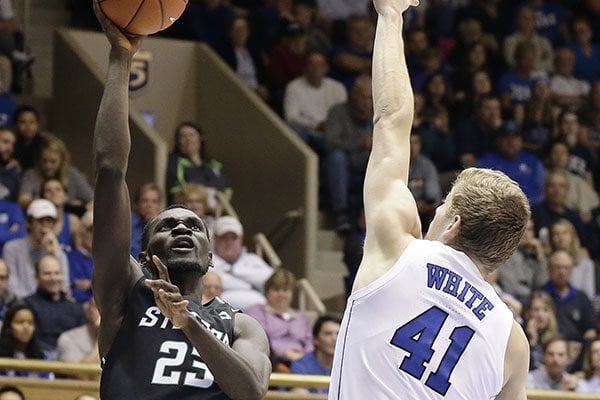 FAYETTEVILLE — Abayomi Iyiola, who had 19 points and five rebounds in a game at Duke while playing for Stetson last season, will transfer to Arkansas.

Iyiola (6-9, 210 pounds) chose the Arkansas over Wake Forest, Georgia Tech, Washington State, Rutgers and others. At Stetson he played for Corey Williams, who is now an assistant coach for the Razorbacks.

Iyiola averaged 10.8 points, 7.8 rebounds and 1.2 blocks last season and will have two years to play for the Razorbacks after sitting out this season due to NCAA rules.

He played his high school basketball at Greenforest McCalep Christian Academy in Decatur, Ga., and had offers from SMU, Stetson, Alcorn State and College of Charleston before choosing the Hatters.

Whitt and Cylla are graduate transfers who are eligible to play this year. Vanover has filed a request for immediate eligibility.