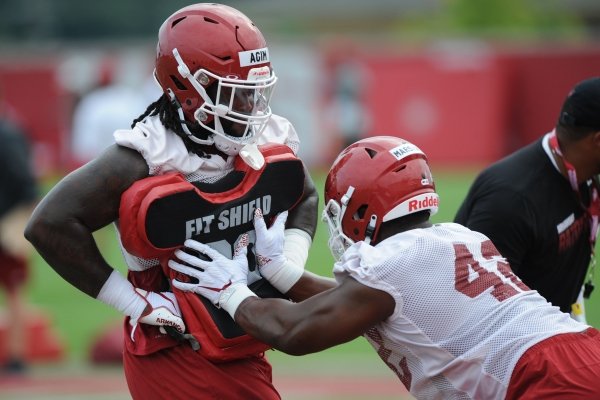 This season the plan is for Agim to stay at tackle and help anchor the inside.

"That was something I talked about with the coaches before I decided to come back," said Agim, who considered entering the NFL Draft after last season. "My feeling was that if I do come back, I need to play inside. That's where I'm going to play in the NFL."

Agim said the feedback he received from the NFL Draft Advisory Board was that he was projected to be picked from the third to fifth rounds and should return to college.

"At one point, I thought I had almost made up my mind that I was going to enter the draft," Agim said. "If I had gone to the combine and tested well, I think I could have been a third-round pick."

Agim, who is from Texarkana, Texas, and played at Hope High School, said he decided to stay at Arkansas after more discussions with his family, praying about it and talking with Razorbacks Coach Chad Morris about playing tackle.

"Coach Morris was like, 'What you want is what I want, but we're always going to put the team first and you're going to help the team out more at tackle,' " Agim said. "I totally understood what he was saying.

"I want to help the team win and mentor the young kids on the D-line, but improve my draft stock as well."

Agim has played in 37 games without redshirting, including 28 starts. He started the final five games in 2016 at tackle, started 11 games at end in 2017 and started nine games at end and three at tackle last season.

"I thought you noticed a big difference last spring with Sosa moving inside and making that commitment and choosing to come back and and take the role that [coordinator John Chavis] and our defensive staff have asked of him," Morris said. "He bought fully in.

"I feel really good at this weight," he said. "I haven't lost any speed or quickness."

Senior tackle T.J. Smith, who has 22 career starts, said he's glad to be playing alongside Agim.

"I think it'll be a great deal for the team and for Sosa to have him inside," Smith said. "You can tell already with what we're doing that he's a lot more stout.

"You can't be a smaller body on the inside in the SEC. It doesn't work all that well. But he's still moving great with the added weight."

"I've gone against Sosa for the last three years, and it hasn't gotten any easier," Clary said. "He comes in and works every day and gets better.

"He's got that slippery aspect to him, and he's strong and powerful and quick off the ball. He's pretty good all around. I'm not a D-line coach, but there's nothing I see that he's bad at. And if he's not great at something, he's going to work on it until he is great at it."

"Here's the thing, man, Sosa's coachable," Ingram said. "When you've got a guy who's had some success and you've got a new coach coming in, to be able to connect with him and establish a relationship is big.

"Sosa went through spring not looking for a day off. He practiced hard. He wants to be that type of player that has an impact on our team. We definitely want to challenge him to be great every day."

Ingram said Smith made a big jump in spring practice.

"T.J.'s a very mature guy, and he's worked so hard to transform his body," Ingram said. "I'm very confident that he's going to have a tremendous season.

Agim said he knows the team also can count on Smith's consistency.

"T.J. is going to be where he needs to be on every play," Agim said. "You've never going to see him out of position.

"I feel like we're going to be a pretty good combo inside."

Junior tackle Jonathan Marshall, who played in 11 games last season, could be ready for a breakout year and add quality depth behind Agim and Smith.

Strength and conditioning coach Trumain Carroll said Marshall, 6-3 and 304 pounds, is the Razorbacks' most freakishly athletic player with his combination of size, strength and athleticism.

"John's explosive for a big guy," Ingram said. "He has the ability to do a lot of things."

Chavis said he believes Marshall has developed into an SEC caliber defensive tackle.

"That's what you need to be playing with," Chavis said. "What would be nice is if we had five like that. But we're excited about John Marshall, there's no doubt about it."

Morris said Marshall's weight room testing numbers are impressive, but that he has make plays in games.

"As I've shared with him, now's the time," Morris said. "We've got to take that and put it on the football field."

Smith said Marshall has all the skills needed to play defensive tackle effectively in the SEC.

"That progress, it's happening for him," Smith said. "Things just take time, but he's come so far from a technique standpoint since he's been here, and he continues to improve."

"Isaiah's an exciting young player," Ingram said. "We expect him to play a role for us.

"He plays with aggressiveness. He plays hard. As he continues to grow in this program, he's going to be a really good player."

Agim said he wants to lead a tackles group that includes six redshirt or true freshmen.

"I need to set the example," Agim said. "I feel like I'm taking on a coach's role.

"I've been doing this for so long. If you've got the knowledge, you have to give it. Just like the older guys did for me when I was younger. It's basically my responsibility to be like that."

Morris said Agim needs to build on his strong performance in the spring.

"If the spring was any indication of how disruptive he could be this fall, he'll have a great fall," Morris said. "He'll continue to put the hard work in and with the expectations we're asking of him.

"But I can promise you our expectations of him are not as high as his expectations for this year. I'm excited about Sosa."