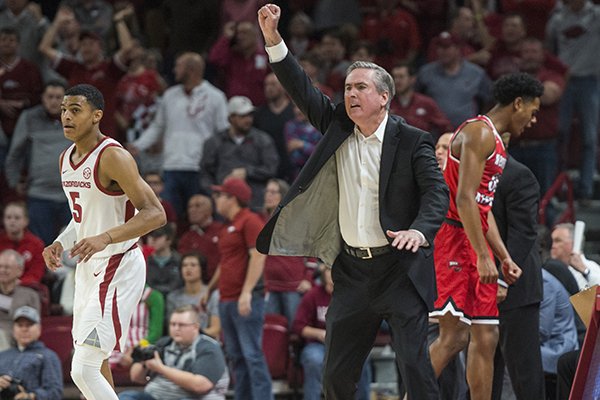 Western Kentucky coach Rick Stansbury motions from the sideline during a game against Arkansas on Saturday, Dec. 8, 2018, in Fayetteville.

FAYETTEVILLE — Another date has been set for Arkansas' 2019-20 basketball schedule.

The Razorbacks will play Western Kentucky on Dec. 7 at E.A. Diddle Arena in Bowling Green, Ky., according to the Hilltoppers' schedule that was released Tuesday.

The game is the second of a two-game agreement between the programs. The Hilltoppers defeated the Razorbacks 78-77 last December in Fayetteville.

Charles Bassey, a post player who could be a first-round NBA Draft pick next year, returns after averaging 14.6 points, 10 rebounds and 2.4 blocked shots per game as a freshman. Bassey was the C-USA newcomer and defensive player of the year last season.

There are eight known opponents and seven known dates for Arkansas' schedule in the coming season. The Razorbacks are scheduled to host Rice in a Nov. 5 season opener, as well as home games against North Texas (Nov. 12), Texas Southern (Nov. 19), Tulsa (Dec. 14) and TCU in the Big 12/SEC Challenge on Jan. 25.

Known road dates for Arkansas include Georgia Tech on Nov. 25 and the Western Kentucky game. The Razorbacks are also under contract to play a game at Indiana on a date to be announced.