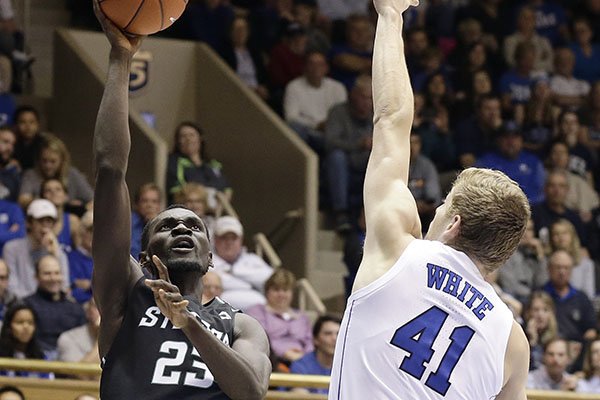 FAYETTEVILLE — It’s not often a prospect commits to a college sight unseen, but that’s exactly what happened with Stetson transfer Abayomi Iyiola (6-9, 210) on Monday.

After talking to the Razorbacks coaches and doing research online, Iyiola, who finished with 19 points and five rebounds in a loss at Duke last season, chose Arkansas over Wake Forest, Georgia Tech and other programs.

“I have not visited there yet, but I plan to do so soon,” Iyiola said. “I chose Arkansas because it’s one of the best universities to earn a degree or masters, and I love the basketball program and the coaching staff.

“I really like everything about the head coach and the rest of the coaching staff.”

Iyiola averaged 10.8 points, 7.8 rebounds and 1.2 blocks per game last season for Stetson and will have two years to play for the Razorbacks after sitting out 2019-20 due to NCAA rules.

“Arkansas is one of the schools that started recruiting me late, but after a long talk with Coach Musselman I felt comfortable, so I felt it was a right decision for me,” Iyiola said. “Plus Coach Corey Williams and I have a great relationship.”

He is the fifth transfer into the program since Musselman arrived in early April.

Graduate transfers Jimmy Whitt (6-3, 175) and Jeantal Cylla (6-7, 220) are immediately eligible while J.D. Notae will sit out this season and center Connor Vanover is waiting on a waiver to determine whether he can play in the 2019-2020 season.

He had offers from SMU, Stetson, Alcorn State and College of Charleston before choosing the Hatters.

Excited about his performance at Duke last season, Iyiola was confident in his abilities even before that contest.

“I always have the confidence in myself since high school that I can play any team anywhere,” Iyiola said.

Iyiola played in 63 games in two seasons at Stetson, averaging 10.4 points, 6.9 rebounds and blocking 58 shots. He recorded 12 double-doubles as well.

“I bring energy every day, run the floor well, shoot the ball well, encourage teammates, (I'm) coachable, respect my teammates and so on,” Iyiola said.

With the addition of Iyiola, Arkansas is now at the scholarship limit of 13 for the 2019-2020 season.