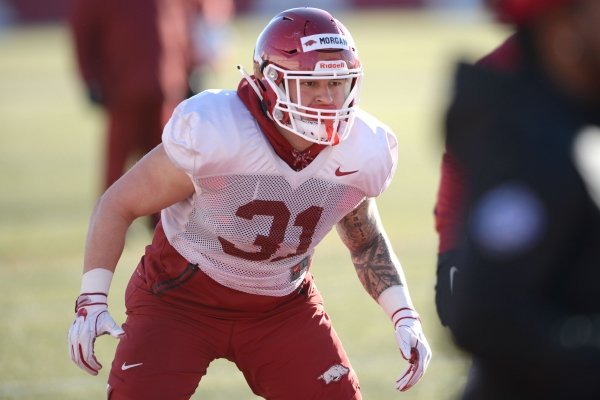 Arkansas linebacker Grant Morgan takes part in a drill Tuesday, March 5, 2019, during practice at the university practice facility on campus in Fayetteville. Visit nwadg.com/photos to see more photographs from practice.

FAYETTEVILLE — Quality depth at linebacker has long been a problem for Arkansas’ football team, but Chad Morris is hopeful things might be a little different this season.

While senior De’Jon Harris (an SEC regular-season leading 118 tackles in 763 linebacker snaps last season) is one of the nation’s best and sophomore Bumper Pool (29 tackles in 340 snaps) filled in admirably for the injured Dre Greenlaw, no one else played more than 115 snaps at the linebacker positions.

“I’m very pleased with Hayden Henry,” Morris said. “You can win a lot of football games with a guy like that. He plays with a chip on his shoulder. Him and Bumper Pool and Grant Morgan, these are guys that have an edge. They play with a great edge.”

Converted junior defensive back Deon Edwards (6-1 220) and junior Giovanni LaFrance (6-1, 237) have not had the impact most thought they would when they signed, but could be coming into their own after having good offseasons.

“I’ve been really pleased with the progression of DeDe Edwards and Gio LaFrance,” Morris said. “I believe they see guys around them that have elevated their game and they’re like, ‘If I don’t pick my game up, I’m fixing to fall behind.’ That’s how you get a better football team. You have to create competition.”

He believes the fact that Pool, Henry and Morgan were Razorbacks fans growing up brings a passion to their play, something he and Arkansas defensive coordinator John Chavis talked about Monday.

“These guys, they play with great passion. That’s what we’ve got to have," he said. "They have a huge love of the Hogs, and when you have that you have a lot.

Junior D'Vone McClure (6-2, 219), who begins this season at 25 years old after playing four seasons in the Cleveland Indians’ minor league system, has moved to linebacker from the secondary.

“He’s working (at) Will and is doing some really good things,” Morris said. “He’s making that transition from nickel over to Will, or from Sam to Will, and it really is more of a comfortable position for him into that boundary spot. He’s a guy that provides some value in that area. Really pleased with him.”

Arkansas beat out Texas and Texas A&M late to sign Andrew Parker (6-2, 239), but injuries plagued him as a true freshman.

“Andrew Parker is a guy (in his) second year,” Morris said. “He’s had four good days of camp. We’re going to challenge him and keep pushing him. Has he gotten better? Absolutely. They’ve all gotten better.”

Arkansas signed only one linebacker in the 2019 class in Zach Zimos (6-4, 211) and added a walk-on transfer in Colorado’s Jake Yurachek (6-0, 239), the son of Razorbacks vice chancellor and athletic director Hunter Yurachek.

Harris, who was second-team All-SEC last season, believes Chavis will mold the group into a strong one.

"We're not concerned," Harris said. "I think Coach Chavis has been doing a great job lately of cross-training a lot of the younger guys. So, the majority of the guys have been getting reps at Mike and Will.

"It's going to be the best linebacker up, basically."