New-look Rebels have a lot to do before opener 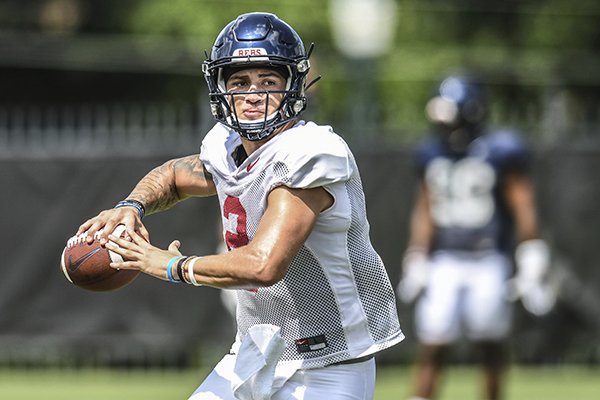 There are also several young starters, especially on offense, including a redshirt freshman quarterback who has thrown just 22 passes in his college career.

Safe to say the Rebels have a lot of work to do before their Aug. 31 opener at Memphis.

"There's a lot of youth in here, a lot of competition," third-year coach Matt Luke said. "But I'm just really excited for this month of August to build and mold this team."

Ole Miss could be one of the Southeastern Conference's more intriguing teams this fall, mainly because there's so much uncertainty around the roster and how the new coordinators might use the young talent. Not much is expected: The Rebels were picked to finish sixth out of seven teams in the SEC Western Division in the media poll that was released in July.

Youth is certainly a concern, but coaches and players say it's not necessarily a bad thing.

"I don't have to worry about bad habits," new offensive coordinator Rich Rodriguez said. "Because they don't have any habits."

The program does have a carrot that's been missing. Ole Miss is once again eligible for the postseason after serving a two-year ban due to NCAA rules violations.

"It's definitely different," senior linebacker Qaadir Sheppard said. "For me, I'm excited, because I've never been to a bowl in my career. It's great to be able to compete for one."

Rodriguez and defensive coordinator Mike MacIntyre bring ample head coaching experience — more than 30 years combined — and are now in the process of overhauling a program that was 16-20 over the past three seasons, including 5-7 last fall.

Rodriguez hopes to bring a more balanced offense. In recent years. Ole Miss was known for an all-or-nothing vertical passing game that resulted in a lot of touchdowns or three-and-outs.

The Rebels expect Corral to be the starter at quarterback, even taking the rare step of bringing the freshman to SEC Media Days in July.

He completed 16 of 22 passes last season for 239 yards, two touchdowns and one interception last season, but still has four years of eligibility thanks to the year-old rule that allows players to compete in four games without losing their redshirt.

"Matt's been terrific since I've been here," Rodriguez said. "I have to get on him on certain things like you do all your players, but I've loved working with him. This camp is going to be the most challenged he's ever been in his life, but I think he's looking forward to that."

The 6-foot-1, 205-pound Corral has some speed to go along with his arm, running for 83 yards and two touchdowns last season. Rodriguez feels that's a good fit for what he's trying to accomplish.

"He wants to get better," Rodriguez said. "It's my job to help him get there."

MacIntyre is switching the defense to a 3-4 alignment with three defensive linemen and four linebackers, which was a staple during his later years as the head coach at Colorado.

The Rebels have 10 defensive starters returning, but it remains to be seen if that's a positive. Ole Miss has had one of the league's worst defenses over the past three years, giving up about 35 points per game over that stretch, including 36.2 points in 2018.

MacIntyre says there's reason to believe the Rebels can improve in a hurry.

"I know the young men have a good grasp of the defense," MacIntyre said. "Now we have to go out and get enough repetitions to get them ready to go."