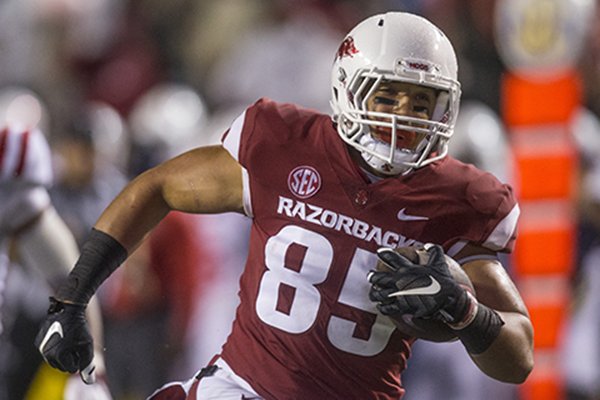 O’Grady, a redshirt senior from Fayetteville, has been taking third-team reps to go along with some first-team work early in training camp for the Razorbacks.

“You know we’ve got a standard that we’ve set and we’re going to play at,” Morris said when asked about O’Grady after Tuesday’s fourth practice of camp. “You do that, and you’ll be running with the group you want to run with. If not, we’ll let you run with the other groups. That’s kind of where we’re at with C.J.”

Morris didn’t specify what O’Grady had done that wasn’t up to standard.

Tight Ends At a Glance

Analysis The tight end group could challenge the Arkansas tailbacks as the deepest position group on the team. O’Grady is capable of putting up All-SEC numbers if the offense takes a step forward in the second season under Chad Morris. Gunter has battled injuries and has shown flashes of being a mismatch at 6-6, 243 pounds. Harrell provides an intriguing talent at a new position. Henry was a dominant high school player with the skill set to make an early and sustained impact as a Razorback.

“C.J. has got to decide if this is exactly what he wants to do,” Morris said. “Our standard is not going to change. He’s one of the best football players in the country, and we’re going to treat him that way. So we’re going to see how he responds.”

O’Grady’s football skills as a pass catcher never have been in question. Catches in traffic, high-pointing balls over defenders and one-handed catches are all on his resume since his playing days at Fayetteville High School. He tied for the team lead with 30 receptions last year, and led Arkansas with six touchdown catches.

His attitude and reaction to negativity are what has landed the 6-4, 256-pounder in coaches’ doghouses from time to time.

O’Grady recognized as much during UA media day Saturday when asked what was important to him as a senior.

“Just taking a professional approach to everything I do,” he said. “Trying to stay off the coach’s bad side as far as how my attitude goes or how I respond to failure. I think that’s one of my biggest …”

O’Grady couldn’t pinpoint the word he was looking for to finish that statement before the term “knocks” was suggested.

“Exactly,” he said. “It’s just taking away from me from being the best I can be. Like, what would I do if it was the head coach or a GM or something? Would I react that way? No. I just have to practice good habits and get away from the bad habits.”

Tight ends coach Barry Lunney Jr. said his expectation is for O’Grady to have his best season yet.

“A lot of people were talking about him last year living in the public eye both positively and negatively,” Lunney said. “He knows this. He’s got a lot at stake this year, not only for himself but for this football team.

“A lot of that goes to how he approaches the game off the field: mentally, the extra work, attention to detail, attitude. I fully expect those to be at a premium for him this year for him to get out of it what he wants.”

Morris said the best players he’s ever coached — rattling off the names of Tajh Boyd, Deshaun Watson, Sammy Watkins and Courtland Sutton — demanded to be held to a higher standard. He thinks O’Grady should fall into their category.

“He’s working a little bit with the third unit right now,” Morris said. “So we’ll see. He’s getting some first unit, too. He’ll respond. He always does. He’s done it the last couple of days.”

O’Grady leads a pack of tight ends that rivals the deep units of previous Arkansas teams. Chase Harrell, a transfer from Kansas who played wideout last year, Hayden Johnson and Trey Purifoy are seniors along with O’Grady. Grayson Gunter and Blake Kern are juniors, and Hudson Henry is a legacy signee and four-star talent who follows father Mark and brothers Hunter and Hayden to the Hill.

“Absolutely I think our room is very deep and very talented,” said Gunter, who had four catches for 51 yards and a touchdown last year.

“I feel like every year we’ve had one of the most dominant tight end rooms in the country,” O’Grady said. “As far as our room goes, every year, the proof is in the pudding. We’ve produced.

“We’ve put several tight ends in the NFL who are still playing to this day. And it’s every year, if not every other year. That just goes to how our coaches use tight ends, how they trust the tight ends.”

In addition to Mackey Award winners D.J. Williams (2010) and Hunter Henry (2015), the Razorbacks have produced NFL tight ends Chris Gragg, A.J. Derby and Jeremy Sprinkle in the past decade alone.

Harrell was touted by strength and conditioning coach Trumain Carroll as having great winter and summer conditioning work, reshaping his body and reporting at 251 pounds. He’s taken first-team snaps in recent days.

“He’s so much more at home at that tight end position, and so I’m really pleased with Chase,” Morris said. “I think Chase is going to add great value to that room this year.”

In the search for mismatches, pairing the Razorback tight ends versus nickel backs, safeties and linebackers could lead to more plays with two tight ends or detached tight ends this season.

“Chase Harrell, we moved from wideout. Well, you think he could run a little bit, right? Well, he can. And Hudson played wideout. His route-running prowess and his experience as a route runner is very vast. So those three guys, all similar in a lot of ways, and probably their greatest asset is their ability to run routes and catch the ball in open space. But they all happen to be 245 pounds or larger. Will we use that? Absolutely we will.”

O’Grady projects that Henry will live up to his hype.

“He’s going to be really good, I think,” O’Grady said. “He can move around well. He’s getting the offense down already. I know he got it down faster than I did.

“If the coaches think that gives us the best opportunity to win a game, then sure, I’m all for it,” Gunter said. “Get as many tight ends out on the field as you can. I think we can make plays, and I think that we’ll make plays when our number is called.”

O’Grady did not get named to the preseason All-SEC team, as Missouri’s Albert Okwuegbunam and Vanderbilt’s Jared Pinkney were on the first two teams, and Alabama’s Miller Forristall and Georgia’s Charlie Woerner tied for third team.

“Doesn’t faze me at all,” O’Grady said. “I worry about this team and how I can help this team. I don’t care about the rewards and preseason stuff. That goes right over my head. I’m going to keep my head down, and I’m going to do whatever I can do to help this team.”

Gunter agreed that O’Grady wasn’t bothered by the preseason snub.

“C.J.’s the same dude every day,” Gunter said. “He doesn’t get flustered by outside noise. He’s a guy who’s going to do his own deal. He blocks everything else out. That’s something that really separates him from a lot of other players that will read a lot of outside noise.”

Morris said he thinks O’Grady will respond to the early camp challenge.

“I think we’ve got some competition in that room,” he said. “I think it’s iron sharpens iron.”