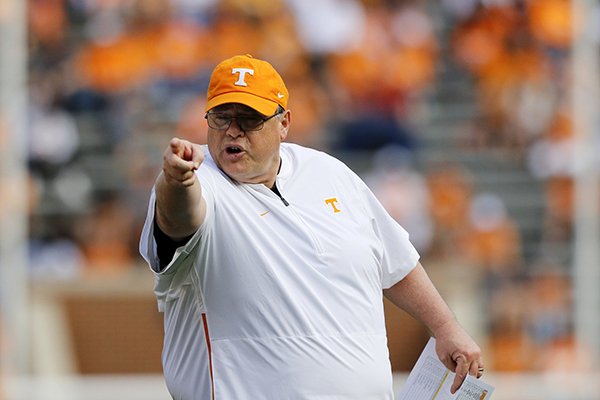 LITTLE ROCK — At a half-dozen SEC schools, coaches calling the plays will be different than in 2018, but only Vanderbilt’s Gerry Gdowski is eligible for the free pass often accorded a newbie to the job.

At Auburn and Mississippi State, Gus Malzahn and Joe Moorhead only added to the scrutiny that comes with being a head coach in the SEC when they assumed the additional responsibility. Dictating the offense, they join head coaches Dan Mullen at Florida and Jimbo Fisher at Texas A&M.

Pay, personnel available and the past are among the most prominent pressure points on play callers, and all three apply to Alabama’s Steve Sarkisian. Also under the gun are Ole Miss’ Rich Rodriguez and Tennessee’s Jim Chaney.

On the other hand, Vanderbilt’s quarterbacks coach the past three years, Gdowski, spent nine years at Ohio University — not exactly the sort of resume that ratchets up fan expectations.

For decades, third-down failures and other offensive missteps prompted coulda, woulda, shoulda from fans and media and recently soaring salaries provide a built-in punch line when second guessing: “He called that play and we’re paying him __ a month?”

Until they were hired, no offensive coordinator in the country made as much as $1.5 million, according to The Associated Press. Defensive coordinators are paid even better, starting with LSU’s Dave Aranda at $2.5 million and Texas A&M’s Kevin Steele pushing $2 million.

Add to Sarkisian’s annual stipend the fact that get-acquainted time with fans is unneeded because he was offensive analyst/coordinator at Tuscaloosa in 2016 when Alabama won the national championship. He inherits one of the Heisman Trophy favorites in quarterback Tua Tagovailoa, plus running back Najee Harris, and a slew of other talent. As usual, nothing less than an appearance in the College Football Playoff is acceptable for the Crimson Tide.

On the surface, Sarkisian’s path to success appears greased, but his offense depends on the quarterback correctly reading the defense and reacting. Tagovailoa’s performance in the national championship game loss to Clemson in January is troubling. More than once, he missed clues and forced the ball.

Because Auburn won only seven regular-season games just months after Malzahn signed a seven-year contract for $49million, there is an argument to be made that he is under the most pressure.

Malzahn’s supporters remind that he called plays when Auburn was 2010 national champion — albeit some ignore the fact Cam Newton was the quarterback — and that he was in charge when Jarrett Stidham completed 15-of-21 for 373 yards and five touchdowns last December when the Tigers scored 63 on Purdue in a bowl game - 56 in the first half.

On the other side, 7-5 is the succinct response.

Also in play when assessing Malzahn’s 2019 record is the fact that the Auburn defense might be the best in the SEC.

No matter what happens, a Malzahn quote from SEC Media Days will be regurgitated: “When I decided to go back and call plays, that’s really who I am.…When I’m back in the swing of things, the day-in and day-out coaching on the field, what happens is the whole team takes on my personality.”

Moorhead, whose salary of about $3 million per year is one of the lowest among the SEC head coaches, developed a reputation for surprising defenses with his calls while offensive coordinator at Penn State.

He talks about using more than a half-dozen formations without substituting and his make-sense theory is that the defense must line up not knowing for certain the offensive alignment.

Although his star faded after stints as head coach at Michigan and Arizona, Rodriguez might have been the hottest name among college coaches near the end of his seven-year run as West Virginia head coach. A 60-26 record and guiding the Mountaineers to within one win of the 2007 national championship game will do that.

Despite a 58-57 record after leaving Morgantown, his reputation for creativity is intact. In fact, Ole Miss coach Matt Luke called Rodriguez “one of the most innovative minds in our sport” when he hired the 56-year-old.

Although Rodriguez was on the cutting edge of the spread offense, his emphasis is on the run game.

A former Arkansas assistant, Chaney spent four years as Tennessee’s offensive coordinator and the Vols were below .500 in three of those seasons. But, the past three years, Georgia was 32-8 with Chaney and co-coordinator James Coley calling the plays.

Chaney has a reputation for producing NFL quarterbacks — Drew Brees and Kyle Orton played for him at Purdue — and is expected to develop junior Jarrett Guarantano.

Coley is solely in charge in Athens and fans expect the recent success to continue considering the presence of quarterback Jake Fromm, running back D’Andre Swift and a highly touted offensive line.

Although unlikely, it is possible for Sarkisian, Malzahn and all the others to meet realistic expectations simply because there is a wide disparity in what constitutes a successful season at Ole Miss and Alabama.

Along those lines, the Arkansas offense is guaranteed to improve under second-year coordinator Joe Craddock.