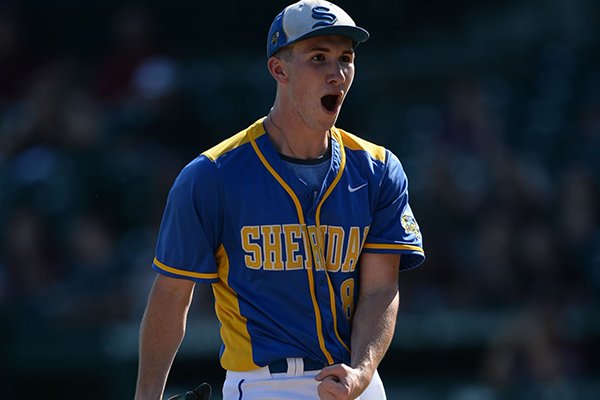 Sheridan reliever Brandon Arledge celebrates Friday, May 17, 2019, after the final out of the Yellowjackets' 2-0 win over Benton in the Class 5A state championship game at Baum-Walker Stadium in Fayetteville.

Sheridan junior Brandon Arledge committed to the Razorbacks two days after receiving an offer. Arledge is Arkansas' 12th public commitment in the class of 2021.

"It was good to be able to call them and tell them that I'm committing to them, and hopefully become a Hog one day," Arledge said, "because it's been my dream."

Arledge (6-1, 190 pounds) is the third player to commit to Arkansas from Sheridan, the Class 5A state champion earlier this year. Other Sheridan commits to the Razorbacks are senior right-handed pitcher Tyler Cacciatori and junior catcher Cooper Oliphant.

Arledge also plays with multiple other players committed to the Razorbacks on the Arkansas Sticks summer travel team.

"It's definitely good to know you're going to be coming into college knowing some of your teammates in your class and the older class above you," Arledge said.

As a high school sophomore, Arledge was 4-0 with a 0.60 ERA in 14 appearances. He earned two saves, including one in the Yellowjackets' 2-0 victory over Benton in the state championship game at Baum-Walker Stadium in Fayetteville.

Arledge said his fastball sits around 84-86 mph and has touched 87 mph, and he also throws a curveball and a changeup. Chase Brewster, coach of the Arkansas Sticks, said Arledge projects to increase his velocity quite a bit by the time he makes it to college.

Brewster said former Arkansas pitching coach Wes Johnson watched Arledge pitch last fall, but his velocity was down at the time at the end of a long stretch of playing games.

"We all knew that he was as talented as anyone in the country on the mound left-handed," Brewster said. "He's a young kid for his class, so that 85-87 (mph) is going to be 87-90 before you know it. He's going to have a chance to pitch on the weekend for the Hogs."

"It was an easy process where he wanted to go once he got the offer from them."