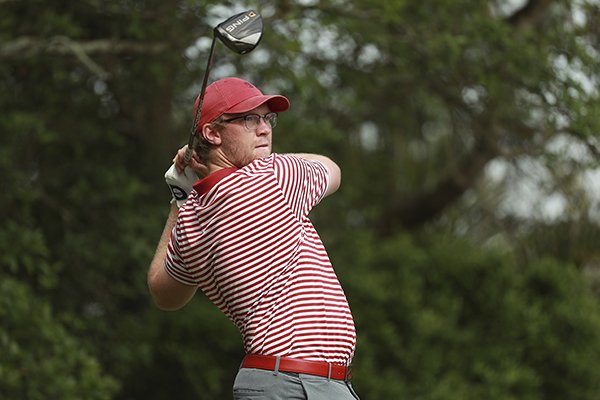 William Buhl of Arkansas hits a tee shot during the Valspar Collegiate Invitational at the Floridian on Monday, March 18, 2019, in Palm City, Fla. (AP Photo/Scott Halleran)

Buhl, representing his birth country of Norway, shot par on the first 17 holes, then birdied No. 18 to complete the 6,692-yard par 70 course in the 60s in all four rounds. Buhl took a five-stroke lead into the final round by shooting 69-68-67 through Wednesday.

“It probably looks boring on the scorecard, but I had to grind a little bit for those pars,” Buhl said in a UA release. “I had three or four 8-10 footers for par. It felt great to finish off with a birdie like that, especially in front of the crowd.”

Buhl finished eight shots ahead of second-place finishers Calvin McCoy of Highlands Ranch, Colo., and Luke Kluver of Norfolk, Neb. His second-round 68, played at the Links of Brunello on Tuesday, was a course record.

Buhl, who played his prep golf in Fairhope, Ala., was a co-medalist at the Gopher Invitational in Independence, Minn., last September.

The victory earned Buhl automatic entry into the 2019 U.S. Amateur, starting Sunday in Pinehurst, N.C., and the 2020 RBC Canadian Open in Toronto next June.

“To win any national championship, especially the Canadian Amateur, is a major accomplishment,” Arkansas coach Brad McMakin said in a release. “This will go a long way for his confidence. He will also gain great experience playing the US Am and a PGA event as a result of his win. I look for him to have a great senior year.”