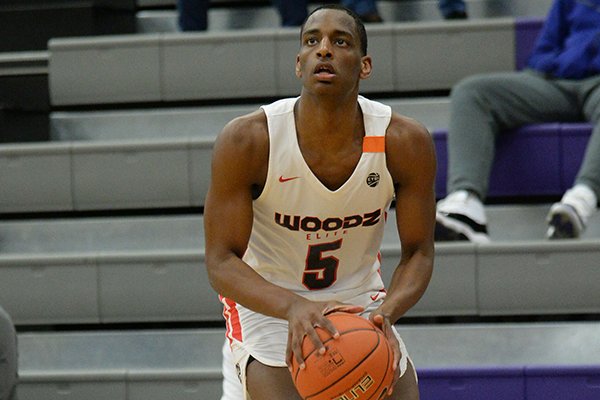 Arkansas welcomed a pair of talented young in-state basketball players to campus on Tuesday and will bring in another pair of standouts this weekend.

It's the continuation of a steady stream of prospects that new Razorback basketball coach Eric Musselman and his staff have gotten on campus lately in an effort to expand relationships with players and coaches.

Smith, who has offers from Arkansas, Texas, Oklahoma State and Tulsa and interest from Auburn and others, was impressed with the Razorback coaching staff.

"If you make a decision to go to Arkansas, it is going to change you as a player on the court and off the court," Smith said. "They are going to turn you into a pro. That's a big thing."

Smith, who averaged 15.4 points, 2.2 rebounds, 3.4 assists and 1.4 steals per game for the Bears as a freshman, visited Texas on Friday and may get to Auburn before the school years starts.

"I've always just liked the culture around Arkansas because it's my type of vibe," Smith said. "I guess it is just my state. I really liked the campus and they showed me around and stuff, but I also really liked the Texas campus."

Maxwell was excited to learn more about Musselman being a head coach in the NBA with both Golden State Warriors and Sacramento Kings.

Arkansas assistant coach Clay Moser was an assistant with the Los Angeles Lakers for the last seven years while Razorback assistant Corey Williams won an NBA title with Michael Jordan and the Chicago Bulls as a rookie in 1993.

"It was cool learning about the coaching staff and how much experience they have and what they have been through throughout their whole careers," Maxwell said.

Arkansas will be hosting a pair of 2021 guards this weekend with Marianna's Terran Williams (6-5, 180) arriving on Friday and Memphis Briarcrest junior point guard Kennedy Chandler (6-0, 164) in Fayetteville on Friday and Saturday.

Bryant senior point guard Khalen Robinson (6-0, 170) is slated for a UA visit later this month. He hauled in offers from Arkansas, Kansas, Oklahoma, Florida and others this summer while moving into the top 100 players nationally.

Maxwell, who has Division II offers and Division I interest from Tulsa and Oklahoma State, was impressed with Musselman's focus.

"He just really showed so much interest in me and really explained how he wanted to play and how we would fit in," Maxwell said. "He talked about what he had been through and what he taught his kids (players) and how he could get things done. I believe him."