State of the Hogs: Morris adds guru in Turner Gill 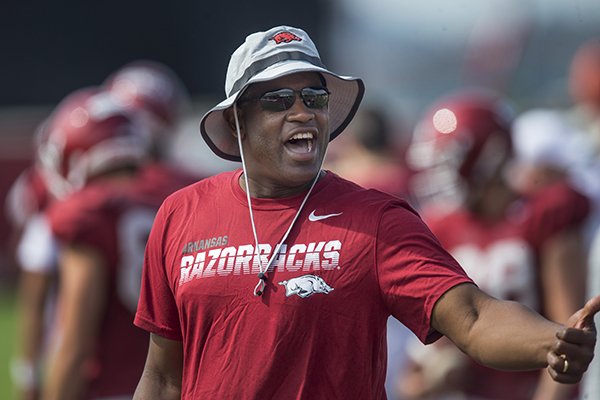 Turner Gill is shown at an Arkansas football practice on Wednesday, Aug. 7, 2019, in Fayetteville. Gill in his first season in a non-coaching role on the Razorbacks' football staff.

The title for Turner Gill with the Arkansas football team is long: Executive Director of Student-Athlete and Staff Development.

I’d shorten it to staff guru.

Synonyms for guru include: expert, authority, leading light, professional and master. It’s also sometimes traded for spiritual leader. It’s on target for Gill, who has been everything through his 56 years.

I’ve known Gill since he arrived on the Nebraska campus in 1980 when Tom Osborne won a much-celebrated recruiting battle with Oklahoma’s Barry Switzer. The Cornhuskers signed the Fort Worth, Texas, star because Osborne convinced Gill the baseball coach would let him also play shortstop.

It was as a young reporter covering the Big Eight Conference for the Tulsa World that I began to interview Gill. I sat with him (along with other reporters) three straight years when the Big Eight Skywriters visited Lincoln. Gill exuded character then and now.

There has never been a more impressive college player interview than Gill. Everyone said that about the quarterback who was undefeated in 20 Big Eight starts.

Yes, Gill was surrounded by the likes of Mike Rozier and Irving Fryar in one of college football’s most famous offenses, but the quarterback was amazing as a runner and thrower. Rozier won the Heisman Trophy in 1983; Gill was fourth and Fryar finished 10th. Fryer became the No. 1 NFL draft pick.

It was with great excitement that I sat down with Gill in his office in the Smith Center in early August. As always, Gill did not disappoint. He engaged on every topic, including the one that every reporter continues to bring up.

It’s like an interview with Scotty Thurman and the inevitable question about the shot that won the 1994 national championship for the Razorbacks' basketball team. Gill is always going to be asked about the failed two-point play in the 1984 Orange Bowl when the Huskers were about to beat Miami for Osborne’s first national crown.

Gill smiled. Yes, it’s always asked. And, once again, he took the blame for the pass that bounced off the chest of I-back Jeff Smith and set off a Miami celebration.

The good news is that Gill would later coach Osborne’s quarterbacks to three national crowns (in 1994, 1995 and 1997), so all is forgiven in the state of Nebraska. He coached Eric Crouch to the Heisman Trophy in 2001. Tommie Frazier was second in 1995 after leading the Huskers to back-to-back championships.

“My view on that is still the same, the play you’d like to have back,” he said. “The play is your standard two-point play, a rub play. We had Fryar clearing and Jeff Smith filling the flat. It's called 51-2 flat.

“The quarterback rolls right. There are two receivers to one side. Fryar was in the slot.”

Smith popped open on the pick play. But he dropped the pass.

“My version is that it’s on me,” Gill said. “I can still see it being tipped before it got to him. I’m supposed to hit his left pec. I hit his right pec.” 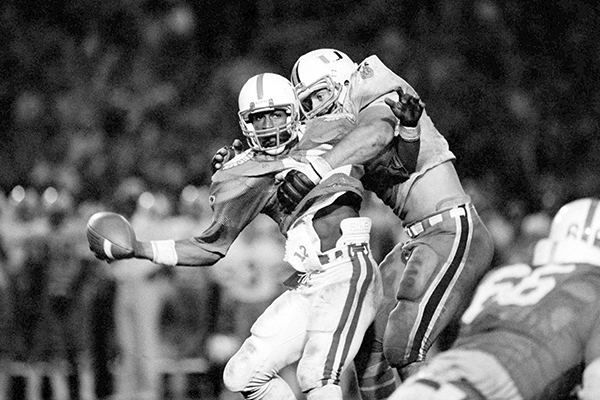 Nebraska quarterback Turner Gill is tackled by a Miami defender during the 1984 Orange Bowl. (AP Photo)

That’s the kind of stuff that makes Arkansas coach Chad Morris know that he’s got the right guru to help his players, his assistants, and even the head coach understand the right thing to think, say and do.

A head coach for 13 seasons at Buffalo, Kansas and Liberty, Gill is at ease counseling players as easily as the Arkansas head coach. And, he was mentored by one of the game’s legends in Osborne, who was a groomsman in Gill’s wedding.

“I invited (Osborne) because I thought I should, but I didn’t really think he could come,” Gill said. “It was during recruiting. But he was there.”

Trust this: Gill will participate in everything that happens with Arkansas football, but he’s not going to work head coach hours anymore. After all, he retired as head coach, to spend more time with his wife, Gayle, who has recovered from heart issues.

It was Gayle who began to tell her husband how many hours a head coach worked. I interjected that it was every waking hour. Gill said, “No, you are thinking about things you need to do when you are asleep, too. There is always something, like what you had meant to tell your coordinators about this or that play. You wake up and realize you were thinking about it while asleep.”

Gayle’s version totaled 90 hours a week. And, it’s probably as on target as Gill’s pass to Smith in 1984. Maybe she was minutes off if not seconds.

“It takes a special person to be a head coach and do it well,” Gill said. “You have to handle all the things in the right way. And, you have to understand to do the things you love and then find someone else who loves to do those other things.

“The head coach needs to do the major things and lead. That’s why I’m here because I think Chad Morris is that kind of person who has great vision and leadership.

“It’s about setting the culture. I see it. And, Chad has the ability to inspire.”

Morris called Gill to offer the job, but Gill was already comfortable with his new boss.

“I knew him all the way back to Stephenville (High School) when I was recruiting the state of Texas,” Gill said. “I respected and admired him then.”

Then, two years ago, Liberty played SMU and there was that typical meeting of the head coaches at midfield during warmups.

“We got to visit,” Gill said. “I thought to myself then that when I retired as a head coach, he’d be one of those who might be a good fit to join. When we were talking, I do remember him introducing me to (son) Chandler.”

The head coaching gig is a monster. Frank Broyles once said, “A head coach gets to make about 250 decisions a day.”

Gill smiled when that was mentioned, then said, “Yes, and there are three to five in that 250 that you better make right. They are things that you don’t ever know are going to come your way.”

Perhaps you are in the middle of constructing a game plan and the phone rings.

“Your mind is full, then something hits that you never imagined,” he said. “You better handle them all the right way.”

You have a chance to do that if you have someone like Gill nearby. When you have Osborne training, you know how to help the head coach.

And, because of Osborne, Gill came to Fayetteville with special insight into Arkansas history.

“First of all, my sister-in-law Karan and her husband Kevin Staten live in Little Rock,” Gill said. “They are Razorback donors. Kevin is an attorney at State Farm. We were on our way to visit them in 2004 from Lincoln and Coach Osborne suggested I might make a stop to see Coach Broyles.”

The call was made and Broyles was in town.

“Fayetteville was about halfway on the trip and he said, ‘Just call when you are one hour out,’ and that’s what I did,” Gill said. “I was hoping for 30 or 45 minutes. We talked for 2 ½ hours.

“Coach Broyles was athletic director then. We talked mostly about life, but I thought I wanted to be a head coach one day and he shared some ideas about that.

“I call that now my Arkansas connection with divine intervention. It comes back full circle now. And, there is one more Arkansas connection I’m proud to tell you. I was a finalist for the Broyles Award in 2002. I’ve kept that plaque. It means a lot.”

More impressive to Arkansas players he will counsel was another topic.

“You might be surprised at how much they knew about me really quickly,” he said, flashing that brilliant smile. “They turn to Google. Coach Morris introduced me with some explanation of my Heisman background (as a player and coach).”

That was the proper hook. Players were all in, as was Morris when Gill inquired about a position that didn’t even exist.

“I knew that he could relate to our coaches, players and me,” Morris said. “I asked him to be an observer for me, engage with players and run our Brotherhood Program.”

“I knew our players would like him,” Morris said. “I got to know him when he recruited my school.

“What I want is for him to help our players with life. I know that if all we do as coaches is help them become better football players, we’ve failed. I know what Turner is going to do with our players.

“First, he’s well respected. He’s been at all levels of football, including an NFL player development role (with the Green Bay Packers). He’s faced adversity as a player and coach.”

There is a piece to the puzzle that’s hard to overlook. Gill is an amazing Christian influence. Part of the path to Arkansas is because of a friendship through Fort Smith‘s T. Ray Grandstaff, a staffer with Fellowship of Christian Athletes.

“This all came together as the moving van was heading to our house in Lynchburg (Va.),” Gill said. “We thought we were going to Lincoln. We have one daughter there and another in Dallas.

“I’d thought about this kind of job and Ron Brown just filled one like it at Nebraska. T. Ray and I talked about it at Arkansas. I thought then Arkansas would be the right kind of place with the right people and when I checked leadership here, it checked all the boxes.”

Gill said his research on athletics director Hunter Yurachek was wonderful, along with Julie Cromer Peoples, the senior administrator for football.

“Julie was trained by Warde Manuel and Warde hired me at Buffalo,” Gill said of the current Michigan athletics director. “Everywhere I looked there were signs that this was the place God wanted me to be.”

Gill doesn’t see things as coincidence. His faith is always front and center, as it is with Morris.

“We have the same values and we speak the same language,” Gill said. “Chad wants to develop the whole man. We have a mesh.

“I’m here to help him build the program. I’ve been at a major program like Nebraska that had been consistent at the top and I’ve been a part of a building process. I truly feel that God put me at Buffalo to help build it.

“And, I think Arkansas is so much like Nebraska in that the passion of the state is the same for the Razorbacks as it is in Nebraska. The people here are the same.”

His job at Arkansas is not the same as it was at most recent stops. He gets to walk away from the “Xs and Os and to engage the players. I’m here to help them understand how to help the student-athlete cope with a big-time program.”

In short, he wants to be to the Arkansas players what he remembers Osborne and others being to him at Nebraska.

“I’ll work with them on accountability, self awareness and emotional intelligence,” he said. “Football is an emotional game. But you have to be careful not to make emotional decisions in life. You need to understand how to take emotions out of it at times.”

Will it be faith based?

“I’m not the team chaplain,” he said. “No one here is going to force (religion) on anyone. Chad doesn’t. But, if players want to go there, I’m open.”

Oh, and Turner Gill will be accurate. He didn’t miss Jeff Smith all those years ago. He won’t miss at Arkansas.