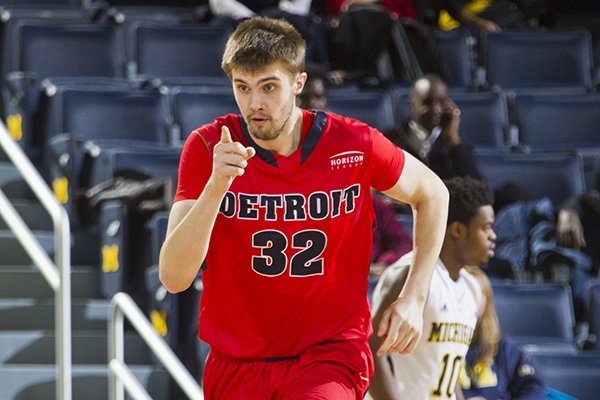 Detroit center Patrick Ackerman (32) reacts after scoring a basket in the first half of an NCAA college basketball game against Michigan at Crisler Center in Ann Arbor, Mich., Thursday, Nov. 20, 2014. (AP Photo/Tony Ding)

Patrick Ackerman, who worked the previous two seasons at Nevada for Musselman as a graduate assistant, is the Razorbacks’ recruiting coordinator, it was announced Friday.

Musselman announced on July 29 that his son, Michael Musselman, had been hired as the Razorbacks’ director of recruiting.

Ackerman was an assistant coach at Bridgewater (Va.) College, which has NCAA Division III athletics, during the 2016-17 season. He played at Penn State for two seasons before finishing his career at Detroit Mercy, where he played as a junior, but not as a senior because of injuries.

Ackerman, a Rutland, Mass., native, earned a communications degree from Detroit Mercy in 2016 and completed his master’s degree in educational leadership at Nevada.