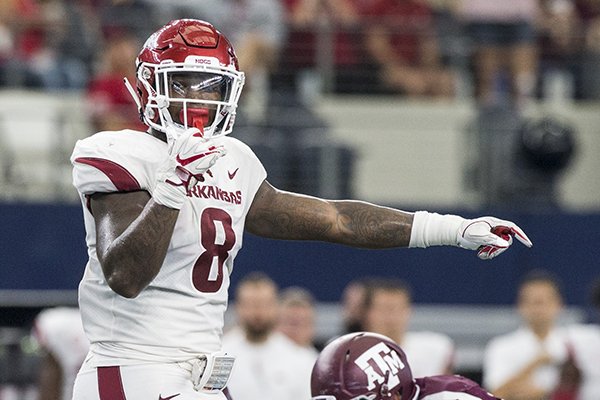 Arkansas linebacker De'Jon Harris calls out a play at the line of scrimmage during a game against Texas A&M on Saturday, Sept. 29, 2018, in Arlington, Texas.

FAYETTEVILLE -- One University of Arkansas defender has interceptions each of the past three days of camp, and it's not freshman safety Jalen Catalon, who has two pick-sixes in that span.

The interception man is senior linebacker De'Jon "Scoota" Harris, who picked off Ben Hicks on Tuesday, then Nick Starkel on Wednesday and Thursday.

Harris said his pass drops and coverage were a point of emphasis when his draft evaluation came back from the NFL Draft advisory board last winter, and defensive coordinator John "Chief" Chavis has stressed it to him.

"That's one of the things me and Chief came together after the season and tried to focus on, just doing a better job in the passing game," Harris said. "So I've been trying to get out early [in coverage] and just had a couple of tipped balls to me from the D-line, just at the right place at the right time."

Harris said he caught a tipped pass in Thursday's work.

"My first two were just me in my right spot, just playing the ball," Harris said.

Harris said the takeaway count is not troubling for the Razorback offense.

"It doesn't give me concerns at all," he said. "We have players on both sides who have scholarships on both sides of the ball. It was good throws, I was just in the right place at the right time."

Junior linebacker Giovanni LaFrance has entered his name into the transfer portal, the Democrat-Gazette learned Thursday.

LaFrance, a 6-1, 237-pound middle linebacker from New Orleans, had posted four career tackles, including three last season. Both LaFrance and cornerback Jordon Curtis had been wearing No. 20 in camp, meaning one of the pair would have to change numbers prior to the start of the season.

Southern University in Baton Rouge is believed to be a likely landing spot for LaFrance.

Based on clips shared on social media by the UA, there were several touchdowns scored Thursday.

Defensive back Micahh Smith, defensive tackle Nick Fulwider and offensive lineman Ricky Stromberg were not spotted during the opening four periods of the workout.

The Razorbacks will hold a closed session for practice No. 7 of camp today. The workout is expected to be in helmets and shorts as a light session.

Practice No. 8 will be the first full-scale scrimmage of camp, and it also will be closed to the media and public.

"It's interesting to see two people battle," Warren said. "Like we battle in the receiving room, but to see it from a different position like that is amazing.

Gerald, a junior-college transfer who arrived on campus the third day of preseason practice last year, looks to be in good shape physically and said he feels better at the lighter weight.

The coaching staff has given numerous players work at right tackle behind first-teamer Dalton Wagner and his top backup Ryan Winkel since redshirt freshman Noah Gatlin was lost for the year to a knee injury.

First-team right guard Shane Clenin said he's among the players who have cross-trained there.

"Myron Cunningham will go out there a little bit when he's not doing left tackle," Clenin said Tuesday. "I'll do a couple reps just to give some people a break. Kirby [Adcock] did a couple, Ty [Clary] did a couple. Dylan Rathcke is kind of like the third right tackle right now, so he's been doing a pretty good job."

Senior defensive end Dorian Gerald said freshman Mataio Soli has been standing out in practice among the young players.

"Honestly, Soli is what you look for in a D-end," Gerald said. "He's very twitchy. He's a big dude. He's fast.

"Soli's just got to keep getting better every day. As long as Soli keeps coming and gets better like he does, Soli's going to be one of the best defensive ends to come through, in my opinion."

Gerald brought up Soli when asked who has done a good job of pressuring the quarterbacks.

"You're going to ask me that? I'm going to say me," Gerald said. "I mean, I like everybody. But me personally, Soli stands out to me. I know I speak high on him, but Soli is going to be a really good player."

The Razorbacks mostly surround the four combatants in the "attack" drill that opened first period on both Tuesday and Thursday.

However, there was a brief window to glimpse an all-receivers drill Thursday that pitted Mike Woods against Jordan Jones, De'Vion Warren and Tyson Morris. Woods fought through his position mates -- who are staggered in a roughly 10- to 15-yard section of grass -- to reach the goal area.

The UA posted a nice clash between freshman defensive tackles Enoch Jackson and Marcus Miller, and another one between Miller and freshman Taurean Carter on its social media accounts Thursday.

"Honestly, we're being more aggressive on defense than we were last year," Marshall said. "Last year, we were playing a little timid because we were new to the system."

Marshall said he's at 304 pounds now and hopes to stay at that weight throughout the season.

"Oh yeah," Marshall said. "I've got to maintain it a lot better. I've switched up my eating habits and all that. So I'm doing a lot better."