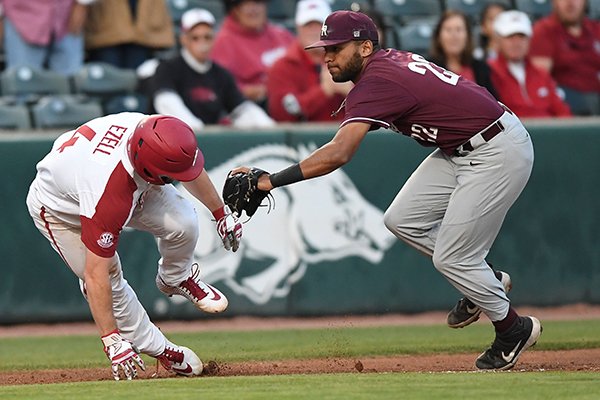 When Ron Davis and his wife walked in, it was impossible not to recall the last time Jeff Long addressed the Little Rock Touchdown Club in 2017.

The Davises support the LRTDC. She is an outstanding police officer and he is a successful attorney who supports his alma mater, the University of Arkansas-Pine Bluff.

After a lengthy session with David Bazzel that day, Long opened the floor to a few questions.

If memory serves, it was 12:51 p.m., leaving nine minutes for questions and long-winded answers.

Davis asked a question that reverberated through the room, and Long’s answer left great doubt about his tenure at the University of Arkansas.

Paraphrasing, Davis asked Long to consider not playing schools from the SWAC. Doing so put a lot of money in the budgets of the programs with which UAPB competes.

To be clear, Davis did not ask Long to play the Golden Lions.

At that time, it was a huge stretch to expect UA to play UAPB, since it had not played an in-state opponent since 1944 when the Razorbacks defeated Arkansas-Monticello.

It had become a hard-and-fast rule to not play in-state schools.

Long haughtily responded that he would schedule who he thought the Razorbacks needed to play.

Over the next few minutes, Long was rude to one of his own boosters, and yours truly left there believing that by the end of that school year — or earlier — Long would be gone.

As we all know now, it was earlier.

Now the UA has played UALR and UAPB in baseball; two football games have been scheduled with UAPB; and basketball is on its way.

When Davis’ legitimate question became public, it stirred a sentiment with some powerful people and opened doors to the 21st century.

Money that comes from Arkansans is now going to other schools in the UA System, and that is a win-win.

That day at the LRTDC, no one knew one question would lead to historical changes. Well done, Ron Davis.

College football officially kicks off Saturday, Aug. 24, when Florida and Miami go at it in Orlando.

While most of the world of perspiring arts has penciled in Clemson and Alabama in a national championship rematch, here are four other teams to watch:

• Iowa State. The Cyclones need a running back to step up, but they went 8-5 last season and return 16 starters. They do have to go to Oklahoma, but get Texas and TCU at home.

• LSU. The Tigers do have to go to Alabama, but they were 10-3 last season and have 16 starters back. All three of their losses were on the road, and they got hosed at Texas A&M.

• Notre Dame. The Fighting Irish are talented, and if they can survive road games at Georgia and Michigan, they will be in the hunt.

Not saying these teams are better than Clemson or Alabama, but if they can avoid injuries, they have a chance to make the College Football Playoff.

Along with the Tigers and Crimson Tide, the favorites are Georgia and Michigan.

Georgia needs a couple of receivers to step up, and Jim Harbaugh needs to prove he is as good on the field as he is off of it.

The Wolverines were 10-3 a season ago, return eight starters on offense, but just five on defense. The Big Ten appears to be a little down, and with Urban Meyer now on the speaking trail, Harbaugh needs to get a title.