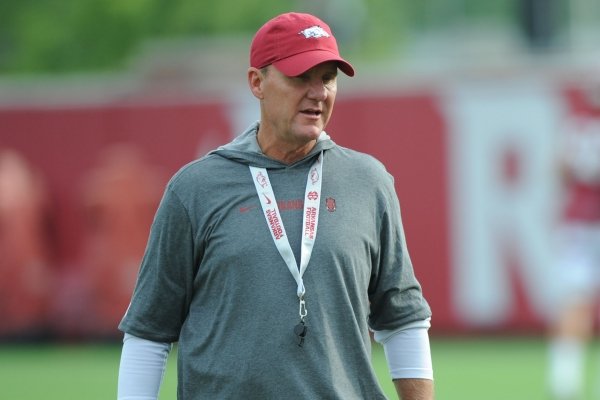 • First scrimmage, by design it was long. Went about 170-175 plays. It got hot and we wanted to go longer because of that. I'm pleased with where we are, but I expect us to be better next weekend.

• Guys who stood out: Sosa Agim and Scoota Harris, who were both limited and coached up some younger players. Jarques McClellion made some great plays on the ball today. Buster Brown same way. Dorian Gerald and Bumper Pool did some good things.

• Offensively, it starts with our quarterbacks and they all four responded today. We started the day with Ben Hicks. He did some good things today, and Nick Starkel got in and did some good things. Both of those guys had a couple of touchdowns today. Trey Knox had a touchdown grab early on from John Stephen Jones. A lot of things to clean up.

• Trelon Smith has a chance to be really special. He showed some flashes today. He is not eligible to play this year after transferring from Arizona State.

• Tight ends made some things happen today and Chase Harrell made a couple of great catches.

• Next week is going to be a pivotal week. The guys are giving great effort and energy, and they love being out there with each other.

• Pleased with all the quarterbacks. Jones led us down on a 7-8 play drive and the offense caught a little fire and wound up scoring. Ben started off and made some really good throws, and Starkel did the same. Nick missed a deep ball down the sideline I wish we could have hit, but there was some miscommunication. I'm pleased with where all four guys are.

• A'Montae Spivey came off today (asthma). We expect to get some guys coming back next week.

• I think we're right on track and I think it starts with culture and where we are with that. We're on the right track, but there's no finish line in this. This is all about being our best every day. We got better today.

• Sam Loy and the punt game: We're getting a lot of reps and we're putting a lot of heat on these guys. I've been pleased with Sam and he's making a push at that position.

• On Cheyenne O'Grady: He has responded and he's added some value to the tight ends room. The receivers today, Treylon Burks had a good day. Koilan Jackson had a nice catch, Shamar Nash made a nice grab down the sideline.

• On the defense: Disruptive up front. Gabe Richardson did some good things today, and so did Jamario Bell. Those guys were active. Greg Brooks continues to impress. Turnovers, there were two. Our goal is three, and that is something we're placing an emphasis on.

• On the corners: Jarques is one of the older guys at his position. Buster and Jarques got valuable reps last year. They made some mistakes last year, but that experience has benefitted them. They have really impressed us and they are really working their craft. You feel their presence back there.

• We've installed well over half of our offense right now. We want to grow off of it. I'd say we're somewhere around 65-70 percent at the moment.

• The defense had no limitations today. We wanted to get after each other.

• Myron Cunningham has been getting some reps over at right guard. He has primarily worked on the left side of the line. As a whole, the line is getting better. We've got a lot of guys getting reps. A lot of true freshmen getting in there. Plenty of guys are pushing others. Colton Jackson has been doing really well at left tackle.

• Consistency is going to separate the starting quarterback over the other. All across the board, that's what we want to see. The big thing that stuck out today, they're all supporting each other. Really healthy competition going on in that room.

• For a first scrimmage, I felt things started really well. We've got to become more consistent and learn to finish. To be able to compete in this league you have to be consistent and as good as you can be.

• We didn't hit the turnover count today. We had two, and that's not good enough. We spend a lot of time working on technique. You always go back to your training. If we can get turnovers and average three turnovers per game then we'll be the best team in the nation, there's no doubt about that. Offense did a good job taking care of the ball today.

• On linebackers: I feel real good about them. We have 5-6 guys I feel good about. We pulled Scoota after a certain number of plays today, and we didn't have any drop-off. Grant Morgan can play and he proved that today. Bumper Pool and Hayden Henry are doing good things. Several guys we feel good about. If we stay healthy then I'll feel good about our depth.

• Corners: It's an area we need to stay healthy at. They've got to grow to get ready. We have young guys playing and younger guys backing them up. We gave up some 50-50 balls that I'm not real excited about. We have to do a great job of coaching and get them ready to play. I feel good about the talent.

• On celebrating with Jalen Catalon earlier this week: I like to get involved with the players and the excitement. When we get a turnover like that and we score, it makes a lot of other guys buy in to what we're doing.

• On Sosa and Scoota coaching young guys: Those two are developing into some of the best leaders I've been around. They're not afraid to talk to their teammates, and it's been my philosophy that we want older players to teach young players. And they're still growing, too. When you have guys who can teach at every position it's a good thing.

• I think it's moving in the right direction. It starts with all the coaches buying in and all the players buying in. It's so much different this year than it was at this point last year.

• We've had a lot of good days, to be honest. Trelon Smith is hard to tackle and he made some great runs.

• On Treylon Burks: He don't have a ceiling. He can be as good as he wants to be. He has the Deshaun Watson mindset and that focus. You love having that kid around, and he wants to be great. He watches extra film, and I'm really proud of him and TQ Jackson. I think we hit on all of our freshmen.

• On Ty Clary: Early on the snaps were a little off, but that was more Beaux Limmer. Ty's snaps ever since the first day were fine. We're seeing a lot of different looks from Chavis, and I like that. The guys are dead tired right now, and we're going to keep pushing them and developing them. We want continuity. We have to find a spot for Cunningham on the field.

• Splitting the fields with 1s and 3s on one and 2s and 4s on the other is developing guys. I think it's been great. I hope we can do this as often as we can.

• Receivers: They are doing some really good things. We've got to get the finer details of the offense down. There's a few too many mistakes right now. We'll get that corrected in the meeting room, but I'm pleased with their progress right now. Getting them out there and getting them reps is big.

• Consistency is going to separate the top two quarterbacks. Put guys in the end zone. Last year we were 129th out of 130 in turnovers lost. We're on the right track correcting that at this point. I love the attitude of the offense. We've turned the ball over on 1.6 percent of plays so far in camp. Out of over 1,000 plays to this point, we've had 17.

I don't want any turnovers. Turnovers aren't accepted in our program. Things happen, and they happened today. There's a constant focus and reminders on turnovers. We chart BIJs - balls in jeopardy. We can't turn the ball over. We're constantly holding guys accountable for that kind of thing.

• We'll start prepping for Portland State about 10-12 days out. We'll start looking at a few things here and there on them.

• On the running game and tailbacks: I want to watch the film. We've had days where we've run the ball really, really well. I remember some days we had good days. Our defense up front is good. We've got some good players on the other side of the ball. There's days they will stop us, but iron sharpens iron.

• We're going to rotate guys, and I like to run in 6-7 receivers. I don't know how you couldn't be in shape for the first game doing what we're doing now.