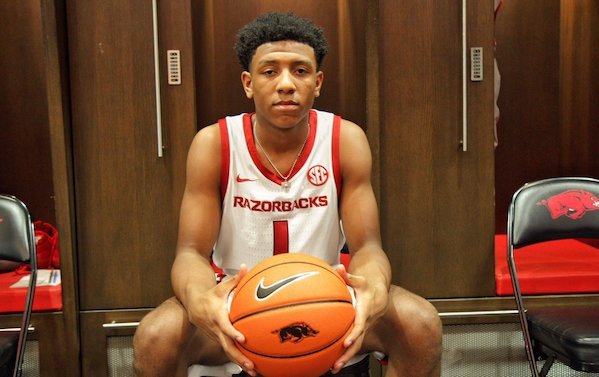 FAYETTEVILLE — One of the nation’s top 2021 point guard prospects and the owner of two big titles in the last six months, took a visit to Arkansas over the last two days.

Memphis, Tenn., Briarcrest Christian junior Kennedy Chandler (6-1, 164) got his first look at the Fayetteville campus and had a chance to spend some quality time with new Razorback head coach Eric Musselman and his staff.

Chandler, who led his team to a state title in March, was accompanied by his dad Kylan Chandler, a high school teammate of former Arkansas star Todd Day.

“I was impressed by the coaching staff, the love and support they gave me,” the younger Chandler said. “It was an excellent visit. I actually had a really good time.”

Chandler, being sought by many of the nation’s top college programs, has his eye on the NBA and was impressed with how Musselman and his staff run Arkansas’ program like an NBA one.

“The way he showed me how he does things for NBA players showed me a lot and that was very impressive,” Chandler said. “The whole coaching staff has an NBA background and they all seem like an NBA coaching staff.”

The Arkansas Performance Center, the Razorbacks’ practice facility, was of great interest to Chandler, who was recently named the 14th-best prospect in the 2021 Class in USA Today’s Chosen 25.

“The facilities were great and the campus was real nice,” Chandler said. “They showed me how I could get into the practice facility and work out at any time by myself or they had guys that could work out with me. That’s something that really excites me because I like to put in the hard work to get better.”

His breakout performance at the Nike Peach Jam in July while leading his Mokan Elite squad to the championship has added even more interest to his recruitment.

Memphis finally offered Chandler during the Peach Jam and now Duke, North Carolina and Kentucky are also showing interest in a prospect that had 21 points, 9 assists and 6 rebounds in the title game.

“For me, it was really just about proving myself on a big stage and I feel like that happened,” Chandler said.

Chandler averaged 14 points, 5.5 assists and 4.8 rebounds for Mokan ELITE and is pleased with how his game has developed, but also realizes he is still a work in progress.

“I think my driving ability, my passing ability are strengths and I need to work on just extending my range,” Chandler said. “My summer was a great summer. I just had a great time, probably one of the best experiences of my life.”

Being just a junior, Chandler has not even close to cutting down his list.

“Right now I haven’t thought about what I want to do so I really don’t have a list of schools that I am definitely considering,” Chandler said.

Chandler averaged 19.5 points, 4 rebounds, 3.6 steals and 3 assists while leading Briarcrest (29-2) to a state title last season and being named that division’s Mr. Basketball.

He had 20 points in an 65-54 overtime win over Brentwood in the championship game.