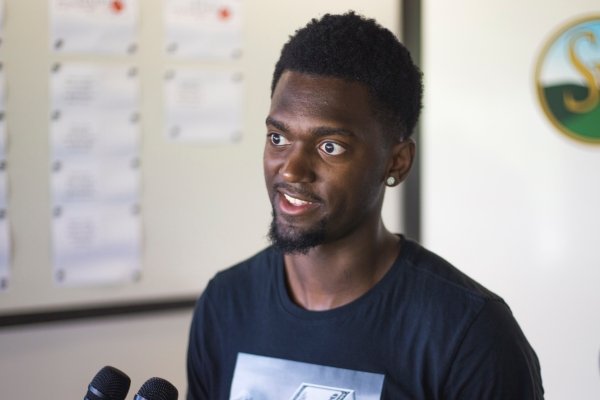 Bobby Portis hasn't had a coveted starring role yet during his NBA career, but the Little Rock native got a taste of what it feels like to be in the spotlight Sunday afternoon.

"I've gotta thank everyone for just coming out and making this a huge success," Portis said following the event. "It's been a great weekend. This is my first time doing this, but next year, we want to make it even bigger and better."

The game capped off three days of activities for his foundation, which he created as a way to aid single mothers throughout Arkansas. Portis' mother, Tina Edwards, served as his inspiration for starting the foundation, but after seeing an overwhelming number of fans pack the same gymnasium where he became a McDonald's All-American for the Warriors, he's doing some influencing of his own.

"This is such a big thing that Bobby's doing, not just for Little Rock, but for the entire state in general," former Razorbacks guard Dusty Hannahs said. "I had such a great time out here playing with these guys. It was an all-star game, and not that we weren't playing hard or anything.

"But we wanted to give the fans a pretty good show, and I thought we did that."

The game was scheduled to tip off at 2 p.m., but lines began forming outside the arena an hour and half beforehand. Tip-off was pushed back by at least 30 minutes, but no one inside seemed to mind, especially with the amount of talent that was assembled.

Portis, who spent the first 3 1/2years in the NBA with the Chicago Bulls before being traded to the Washington Wizards in February, was joined by current Bulls players Antonio Blakeney, Zach LaVine and Wendell Carter, Jr. Blakeney played opposite Portis for the White team, while LaVine and Carter sat and cheered from the sidelines. Also, eight other former Arkansas players took part in the game. Little Rock Central product Joe Johnson, who spent 17 years in the NBA, was in attendance, too.

Portis, who signed with the New York Knicks on July 9, was the main attraction in this one, although the ending didn't quite play out the way he may have liked. The 2015 SEC Player of the Year knocked down 10 three-pointers and scored a game-high 50 points for the Orange. However, Blakeney banked in a running one-hander just before the final buzzer to lift the White to a 161-159 overtime victory.

Blakeney finished with 33 points, while Alandise Harris scored 36 for the White in a fast-paced game filled with dunks and long three-point attempts. Hannahs, who spent the end of last season with the Memphis Grizzlies, added 32 points, while Jacorey Williams and Michael Qualls had 24 and 23 points, respectively.

"Just to put on for a crowd this big in my hometown is a good feeling," Harris said. "Some of us probably haven't played in front of this many people in a long time, but it was a lot of fun for a worthy cause. Events like this give people something to look forward to, and I think everyone that came out enjoyed it."

Moses Kingsley scored 33 points for the Orange, who trailed by as much as 13 points in the second half. Daryl Macon ended with 26 points and Anthony Black had 25.

"It was cool coming out here and playing in front of the home fans," said Macon, who played for the Dallas Mavericks the past season. "This is big for the community. I don't think anyone has done this since Joe [Johnson]. Bobby is a big inspiration to a lot of kids in the city.

"What he's doing is great, but he's just getting started. It's only going to get bigger and better."