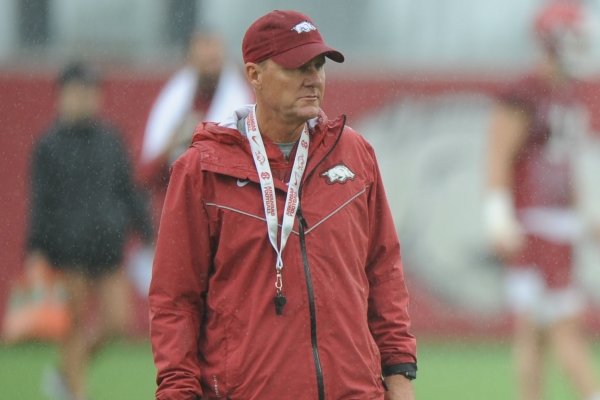 Experts have deemed South Carolina to have the toughest schedule in the SEC and the world.

Normally, a team that plays only two teams from the SEC West is not so honored, but the Gamecocks get Alabama at home and go to Texas A&M.

Plus, they have Clemson at the end of the season, so perhaps the Gamecocks do have the toughest schedule and thus an excuse for going 7-6 again.

Arkansas has the 10th toughest schedule in the SEC, and it deserves a break.

After going winless in the SEC last season and a 2-10 overall record, the Razorbacks’ nonconference schedule looks like it was arranged by Hostess.

The rest of their schedule is tougher than a new bride’s biscuits.

The Razorbacks’ road schedule has Ole Miss, which never loses the party and wins a lot of games at home (but not this one), Kentucky, Alabama and LSU, plus a game in Arlington, Texas, against Texas A&M.

The Wildcats, Tide and Tigers were a combined 34-7 last season.

The Crimson Tide went undefeated at Bryant-Denny Stadium. Kentucky lost only to Georgia at home, while LSU’s only defeat in Death Valley was to Alabama.

LSU may have the toughest road to the SEC Championship Game this season.

The most experienced team in the SEC with 16 starters back goes to Texas, Mississippi State, Alabama and Ole Miss.

The Tigers host Florida — made it their homecoming game to throw a little gas on the fires of that rivalry — and Texas A&M a season after a wild and crazy seven-overtime loss in which officiating was questioned long and hard.

It is very probable that LSU and Alabama will be undefeated when they meet in Tuscaloosa on Nov. 9.

The Western Division is the toughest conference in all of football.

Auburn opens with Oregon in Arlington and has road games at A&M, Florida, Arkansas and LSU, and they close with Alabama every year, this time in Auburn.

The Aggies go to Clemson, the defending national champs, and have road games at Ole Miss, Georgia and LSU.

Who wants that schedule? No one.

Mississippi State, which has to replace seven defensive starters plays at Auburn, Tennessee, A&M and Arkansas. The Bulldogs get Alabama and LSU at home, but so what?

Ole Miss opens the season at Memphis, and it would be nice to know who thought that was a good idea.

The Rebels are at Alabama, Missouri, Auburn and Mississippi State, but that season finale doesn’t seem to have a real home-field advantage.

Alabama has the 44th toughest schedule, but part of that is because it can’t play itself, and the Crimson Tide open with Duke.

They have road games to South Carolina, Texas A&M, Mississippi State and Auburn.

When you are the king of the hill and the team with the biggest target on its back, you get hurt by those who do the ratings because they expect you to win every game, which Alabama almost does.

There is no other division or conference anywhere that has the kind heavyweight competition built into its schedule every season.

Only the Crimson Tide have truly prospered in that kind of competitive environment, but there may be a reason Nick Saban scheduled Duke instead of a Michigan or Wisconsin to open the season.

One thing is certain, the Razorbacks earned their right to play this nonconference schedule. Chad Morris needs something to wipe the taste of last season out of his and his players’ mouths.