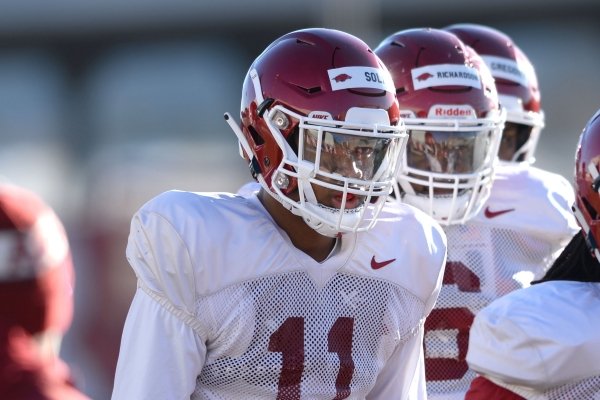 FAYETTEVILLE — Don’t be surprised if three rookies are in the rotation at defensive end when Arkansas opens the season against Portland State on Aug. 31 and fourth joins in later.

That’s the take of Razorbacks defensive ends coach Steve Caldwell, in his 41st year as a coach.

“They’re all going to have to play,” Caldwell said. “Every one of them.”

“It’ll be Soli, it’ll be Zach and I guess it’ll be Collin Clay or David Porter - one of those two right now until Eric Gregory gets back,” Caldwell said.

The two biggest playmakers in practice so far have been two of the youngest.

“It’d be between Zach and Soli,” Caldwell said. "They’ve both made a lot of plays. I’m talking about the young guys. The older guys, shoot, it’s probably about equal, to be honest with you.”

Knowing that senior McTelvin Agim was moving inside full time and Randy Ramsey was out of eligibility, Caldwell needed to replenish defensive ends on the roster.

He did just that with a quartet of signees, with all but Clay enrolling early and going through spring practice, while the Razorbacks also added three defensive tackles in Tauren Carter (6-3, 288), Enoch Jackson (6-0, 292) and Marcus Miller (6-5, 295).

“We added speed, obviously, and we did add some depth,” Caldwell said. “Really the depth came inside, yes, four guys on the outside, so when they’re all well and when you put Soli in there and you put Zach Williams in there, you’ve really got some speed.

“Eric Gregory can run, and Collin Clay has some great quick twitch, so I think we really helped ourselves, and obviously those three young guys inside, too, have helped us.”

“We did some good things,” Caldwell said of the scrimmage. “Obviously we have a long ways to go, got a lot of young kids working, so we made some mistakes, but we were able to make some plays.

“Today I thought we might have even taken a step backward, which is very frustrating. Just the fact we were out there… (Arkansas head) Coach (Chad) Morris warned them, ‘Hey, the new has worn off this week. You’re going to have to learn how to really suck it up and grind.’ That’s a process. That’s a process, and that’s my responsibility to make sure that they’re out there ready to practice. There were some things that happened today that were not acceptable.”

Richardson has become a leader of his group, according to Caldwell, but is still inconsistent at times.

“I think he had a great spring and he’s doing a good job with his leadership out there,” Caldwell said. “He’s just, again, I keep talking about consistency guys. It’s consistency. You’ve got to line up and do it play after play. Really, I haven’t got any of them, and again that’s my responsibility to be more consistent.”

Gerald arrived from junior college in August last season at around 280 pounds, but flashed toward the end of the year. He came into preseason practices at 253.

“Well, I think his athletic ability, his being able to play 2-3 plays in a row,” Caldwell said. “He’s in better shape. He’s been in the system. Still it’s like - I keep saying the word - I’ve got to get him more consistent. He looks like a million dollars one play and the next play it’s Dorian. That’s my job to get him there.”

The same goes for Bell, who has always looked the part.

“I think he’s playing a lot better, yes,” Caldwell added. “I think he and Dorian and Gabe are all doing some good things.”

The defense forced several high turnover counts during workouts last week, but had just two in 175 plays during Saturday’s scrimmage.

“We’re doing a good job with it,” Caldwell said of the takeaways. “We’re not doing a great job. We have to continue to build on it. Every day you have to go out there, it’s a new day. Really, every play is a new play, so we have to focus on trying to get the ball out and do a better job of that. Creating turnovers puts our offense in better field position and turns the game around.”

Caldwell has optimism that the group’s run defense has improved from a season ago.

“I’d like to see - I’m talking about my guys - I’d like to see my guys turn it loose and play the same way when we get into the team periods as they do in what we call our wet-ball drill, which is our inside run drill, which we’re doing a really good job in that,” Caldwell said, “but then it seems like we can’t carry it right on from group preparation into team work.”

He does believe the defense as a whole has improved.

“Well, we’re better right now than we were this time last year,” Caldwell said. “I believe that. Now, how much? We’re going to have to wait until we get into live-game situations. That’s hard to tell. Really go through the first game and keep pressing.