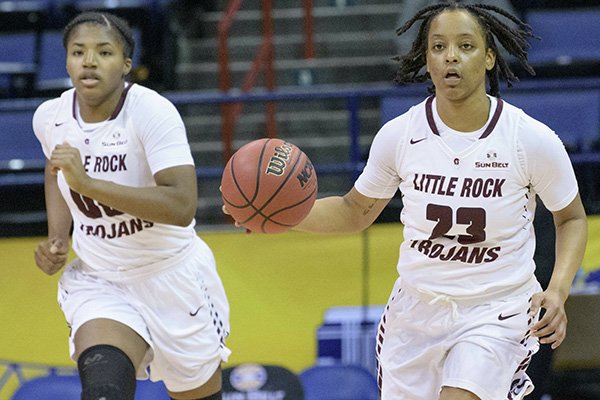 FAYETTEVILLE — Arkansas and Arkansas-Little Rock will play a women’s basketball game Saturday, Dec. 21, at Verizon Arena in North Little Rock, according to a press release Wednesday.

The game is scheduled to begin at 1 p.m. It will be the second meeting between the programs and the first since the Razorbacks defeated the Trojans 74-54 on Dec. 9, 1977, in Little Rock.

In May, Arkansas coach Mike Neighbors said he and UALR coach Joe Foley were playing golf together last August when the Razorbacks announced they would begin playing teams from within the University of Arkansas System. Previously, the Razorbacks had a ban against playing any in-state team in all sports.

“Coach Foley has built their program into a perennial NCAA caliber team, so playing them will benefit our program and build support for women’s basketball across the state,” Neighbors said Wednesday in a release. “When it became clear they were equally as interested in playing us, I couldn’t help but be excited to get the series set.”

UALR is coming off of a 21-11 season in which it advanced to the NCAA Tournament for the sixth time under Foley, who in 16 seasons as the Trojans' head coach has a 333-175 record.

“Coach Foley started out as someone I idolized in women’s basketball during his tenure at Arkansas Tech, became someone I tried to emulate as my collegiate career began, and has become a trusted colleague over the last 20 years,” Neighbors said. “To share a sideline with him and our teams will be very special.”

“This game is very exciting for the state of Arkansas and something the people in the state have wanted for years,” Foley said in a statement. “We will be making history starting this series just like our baseball team did last spring. This game will be great for the state and great for both programs.”

The Razorbacks have yet to release their 2019-20 nonconference schedule, but nine dates are known through other schedule releases or through open records requests. Arkansas is scheduled to host New Orleans (Nov. 8), Oral Roberts (Nov. 14), Belmont (Nov. 20), Kansas State (Dec. 7) and Tennessee-Martin (Dec. 29), and travel to California on Nov. 24 for the start of a two-year home-and-home series.

The Razorbacks will also play Fordham and Wisconsin in the Bahamas Hoopfest Classic in Nassau, Bahamas, on Nov. 29-30.

Arkansas is coming off a 22-15 campaign in which it was the SEC Tournament runner-up and advanced to the third round of the WNIT in Neighbors’ second season.