No denying these were some of the best Hogs 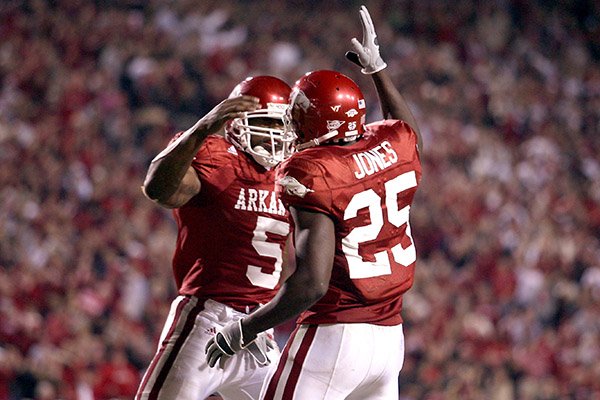 Arkansas running backs Darren McFadden (5) and Felix Jones (25) celebrate during a game against South Carolina on Saturday, Nov. 3, 2007, in Fayetteville.

When the University of Arkansas announced Tuesday that it had scheduled a home-and-home series with Oklahoma State for the years 2032-2033 it was a stunner.

I am not even thinking about retirement, but for that series I’d be … elderly and will probably be watching it on my 180-inch TV.

The scheduling announcement, on a slow Tuesday, got me to thinking about some of the great players I’ve been blessed to cover.

Forget the debates about who started the Wildcat formation or what it was named. It was created for McFadden and should have been named the Wild D-Mac.

In his career at Arkansas he averaged 120.8 rushing yards per game and 130.9 against SEC teams.

A two time runner-up for the Heisman Trophy (and he deserved it at least once) he was the fourth pick of the 2018 NFL Draft by the Oakland Raiders, who may have had the worst offensive line in the NFL.

McFadden played seven seasons for the Raiders and two for the Cowboys, or about twice the average life of a running back in the NFL.

Today he is happily married and living in Dallas.

The best defensive lineman I covered was defensive end Billy Ray Smith Jr., and the key word there is covered. I did not cover Dan Hampton.

Smith was almost unstoppable and still holds the Razorbacks record for tackles for loss with 63. He finished with 299 tackles and was a two-time consensus All-American.

“The party line is this was not an upset,” he told reporters, repeating what Lou Holtz had told his team after the game.

Smith played 10 years for the San Diego Chargers and became one of the most popular players in history and has worked on both TV and radio in San Diego.

The best offensive lineman I covered was Shawn Andrews, who was a freak of nature.

The first time he ran through the rope drill — stepping over a foot-high rope — he was more like a running back than a lineman, and he was singing a gospel song the entire time.

He became a starter as a freshman, was a two-time All-American and never quit singing gospel songs.

No one wanted to line up against him, for a man of his size he had amazing agility, balance and power. His junior season he battled with polyps in his nose that affected his breathing.

He left after that season and was the 16th pick in the first round of the 2004 NFL Draft by the Philadelphia Eagles.

Andrews struggled with back issues most of seven seasons before retiring in 2011. He and his family now live in Little Rock, near his mother Linda and his brother Stacy.

That’s just three who excelled for the Razorbacks and were good enough to play professionally.

Some of my all-time favorites were guys like Tim Horton and David Bazzel, who were classic overachievers and could be counted on every snap.

Like the old journalism term MTC, more to come.