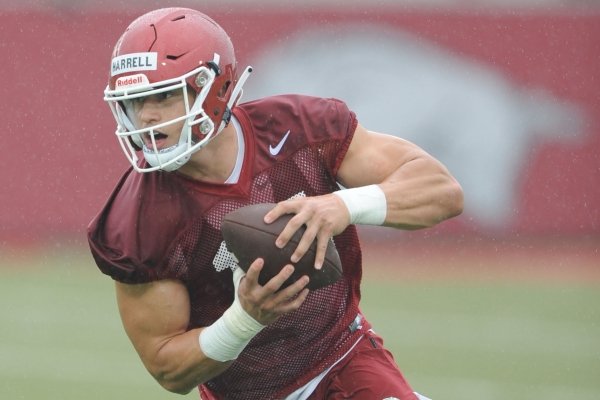 "I was like, 'Hey, you want me to put my hand in the dirt?' " Harrell said. "I was just kidding, but I guess they picked up on it and they wanted me to switch."

Harrell said Lunney told him to just think about it.

The switch is working out well for Harrell, who caught a touchdown pass in Saturday's scrimmage for his second of camp.

"I would say I'm actually catching the ball better," said Harrell, a transfer from Kansas last year. "I've just been putting in a lot of work, so I feel like I'm good in the receiving game."

[Video not showing up above? Click here to watch » https://www.youtube.com/watch?v=hmWu69wGllo]

Harrell, who had 30 catches for 302 yards in two seasons at Kansas and 4 catches for 60 yards last season, said he's had a different mindset since moving to tight end in the spring.

"I knew it was going to be hard because it was a whole new position change, but I just wanted to keep my mind level," he said. "Not get frustrated within myself and just attack everyday."

The 6-4 Harrell said he's increased his weight to 245 pounds after playing at 220 last season.

"Chase has completely transformed his body, and he's so much more at home at that tight end position," Arkansas Coach Chad Morris said. "I think Chase is going to add great value to that room this year."

Harrell said the added blocking responsibility has been a challenge.

"You've got to want to block," he said. "If you don't want to block it's going to be a little harder. But I'm more of a physical guy, so I like blocking. I do have to work on my technique within blocking. I'd say it's getting easier each and every day. I'm going to try to get me some [pancake blocks] this year."

[Video not showing up above? Click here to watch » https://www.youtube.com/watch?v=_D1Dgk89Ak0]

Tight end Cheyenne O'Grady confirmed late Tuesday night that he had a minor injury in practice and is expected to undergo surgery today and be back in a few weeks.

Earlier in the evening, O'Grady sent a tweet that read, "Story might be over sooner than I thought."

O'Grady is the Razorbacks' returning leader with 30 receptions for 400 yards and 6 touchdowns.

O'Grady wrote on his Twitter account at 9:46 p.m., "For those of you who thought this was behavior related, that's not the case. Had a very minor setback today in practice. Going to have surgery tomorrow and I'm praying it goes smooth. I'll forever be thankful for the plan God has for me. Should be back healthy in a few weeks."

[Video not showing up above? Click here to watch » https://www.youtube.com/watch?v=6Cilsqq350Y]

The offense appeared to have won the daily "championship belt" for a second consecutive day Tuesday after the defense registered two takeaways.

"Today I thought we might have even taken a step backwards, which is very frustrating," defensive ends coach Steve Caldwell said of his group.

"We try to get three [takeaways] every day," safeties coach Ron Cooper said. "We didn't get all three of them today. ... So we didn't win the belt."

[Video not showing up above? Click here to watch » https://www.youtube.com/watch?v=c_zHh8qtc6w]

Freshman defensive back Greg Brooks Jr. missed a second consecutive practice after dislocating a thumb in Saturday's scrimmage. The first-team nickel back is expected to miss up to a week.

Senior cornerback Britto Tutt rode on the stationary bike for parts of the early periods of practice.

"We're just making sure the trainer is on him," Cooper said. "He practiced, we just didn't let him hit. He was in green. The trainers tell me that means don't let him hit. So other than that, I didn't even know anything was wrong."

Freshman receiver Treylon Burks worked without his knee brace for at least the early part of Tuesday's practice. The 6-3, 223-pounder from Warren has made several prominent catches through the first 10 workouts of camp.

The UA posted a video on its Twitter account on Tuesday showing Burks getting good leverage on safety Myles Mason and winning a battle against the sophomore.

[Video not showing up above? Click here to watch » https://www.youtube.com/watch?v=jXimMrXJGkA]

Defensive ends coach Steve Caldwell said his senior trio of Gabe Richardson, Dorian Gerald and Jamario Bell make splashy plays, then make a mistake, so he's looking for consistency. Caldwell gave an example of it when asked specifically about Gerald.

"He's in better shape. He's been in the system," Caldwell said. "Still, it's like, I keep saying the word, I've got to get him more consistent. He looks like a million dollars one play and the next play it's Dorian. That's my job to get him there."

"Myron's really athletic," Coach Chad Morris said. "I think he'll be in this rotation, without a doubt. It's just finding where is that rotation at for him."

[Video not showing up above? Click here to watch » https://www.youtube.com/watch?v=WBnZiPbEkHw]

"Myron is very solid," linebacker Hayden Henry said. "He's incredibly built, not a lot of fat on him at all. He's like Hercules with his shirt off.

"He's a tough guy to go against. He's got very long arms. He's got a very high ceiling with lots to build on. He's taking some big steps forward."

"For as big as he is, he really gets down low and does an excellent job getting underneath blocks and posting it up for me to come and clear all out," Wagner said.

Offensive tackle Noah Gatlin tore the anterior cruciate ligament in his right knee on the first day of training camp and will miss the season after undergoing surgery last week.

"We really hated to lose Noah," offensive coordinator Joe Craddock said. "Noah's a great kid. He's going to be a great player for us."

Craddock added that Gatlin wasn't hit on the play.

"Not a dirty play, wasn't any contact, just one of those freak deals," Craddock said. "So we've been really trying to put our arms around Noah and love on him, and he'll be stronger than ever when he comes back."

Chad Morris talked up the potential for transfer tailback Trelon Smith on Saturday, and his new teammates did the same this week after the former Arizona State player displayed his moves in the scrimmage. "Trelon, he's really shifty," senior tailback Devwah Whaley said. "That's his go-to, make you miss. And he can get north and south and catch the ball well out of the backfield too."

"You know Tre is a bounce back so he already knows what to expect," junior tailback Rakeem Boyd said. "He's developed."

Some of the most intense position battles will come at the wide receiver spots, where a large mix of veterans and freshmen will be vying to stake claims on the depth chart and the travel roster.

"We're going to rotate guys," offensive coordinator Joe Craddock said. "We like to rotate about six or seven depending on how many we've got in a game, especially early on with as hot as it'll be out here.

"We're going to have to play some guys and try to keep some guys fresh. We're constantly pushing those guys in practice. I don''t see how you can't be in shape come Game 1 doing what we're doing. So, those guys are getting a lot of reps in the heat. We just got to continue to push through and keep getting better."