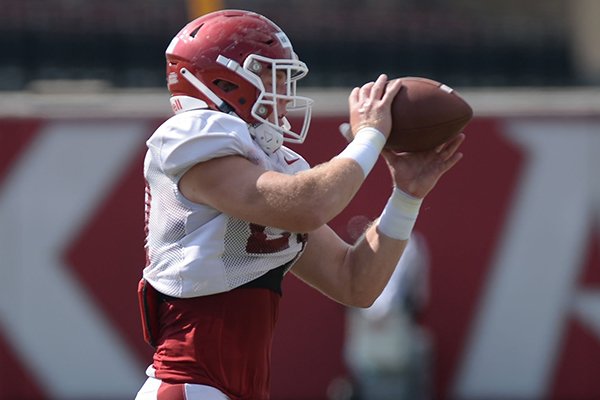 FAYETTEVILLE -- To help turn around a football program that fell to 2-10 last season, the University of Arkansas is putting in work on turnovers on both sides of the ball.

The Razorbacks had a minus-10 turnover margin to rank last in the SEC and 119th out of 129 FBS teams.

That's too many interceptions (18) and lost fumbles (8) by the Hogs' offense, and not enough takeaways. The defense grabbed 5 interceptions and recovered 11 fumbles, nearly half of them (5) in the opener against FCS opponent Eastern Illinois. None of the interceptions was registered by a returning player, as corner Ryan Pulley and linebacker Dre Greenlaw had all five.

The art of the takeaway has been a hot topic for the Razorbacks since the end of Coach Chad Morris' first season.

"That's something we've been placing a huge emphasis on, because if we can create turnovers, we can win a lot of football games," he said.

"We spend a lot of time working on technique," defensive coordinator John Chavis said. "We don't expect turnovers to just happen. We expect to force them. Occasionally, you're gonna get a gift, but there's so much you have to work on.

"There's a technique in getting the ball out, and we work on that. But the biggest thing is when it's really working well is when our players really believe in it."

The defense opened camp by averaging almost three takeaways per day, with 17 through the first six days.

"Takeaways are everything," defensive backs coach Ron Cooper said. "We started off camp making it happen."

During the 2018 season, the Hogs had 26 turnovers on 810 snaps, roughly one every 31 plays. They've cut that in half and then some through 11 practices of camp.

Offensive coordinator Joe Craddock, armed with the stats, said after Saturday's scrimmage that the 17 turnovers had occurred on 1,034 countable snaps, an average of one every 61 snaps. The snaps-per-turnover figure has gone up the past three days.

"You look at that, and it puts us in the top 30 [in fewest turnovers], so if we can do that and continue to keep harping on that we're going to be pretty good," Craddock said. "I'll say it again, turnovers are never going to be accepted in this program. We've got to continue to work on that, and we will over the next couple of weeks until we get ready for fall camp."

Ball security for the offense improved in Saturday's scrimmage and the first two practices this week, when the count apparently dropped to two or fewer each day.

"When the offense doesn't have any turnovers, that's a win," Morris said.

"The emphasis was on [reducing] pre-snap penalties and turnovers this summer," sophomore receiver Mike Woods said. "I feel like we've done a lot better job taking care of the ball.

Running backs Rakeem Boyd and Devwah Whaley said the tailbacks have done an excellent job hanging on to the ball.

"Ball security has been great. Last Saturday in the scrimmage, we didn't give up any turnovers," Whaley said.

"It's been really good," Boyd said. "I don't think we've put the ball down yet on Saturday."

There have been more interceptions than fumbles in camp.

The Razorbacks spend practice circuits on how defenders are taught to strip the football from ball carriers. Cooper said the takeaway circuits stress when to rip and when to punch the ball away from a ball carrier.

"Any time that you can get three turnovers, if you look around the country, three turnovers a game would lead the nation in turnovers. We are young, but we are playing with great effort, and turnovers are going to have to be the key to what and how our defense plays this year."

Morris said the increased number of snaps in camp has led to an interesting tug of war over takeaways.

"Bottom line, turn the ball over and you're not gonna win too many football games," he said. "Create turnovers and you win a lot of football games."