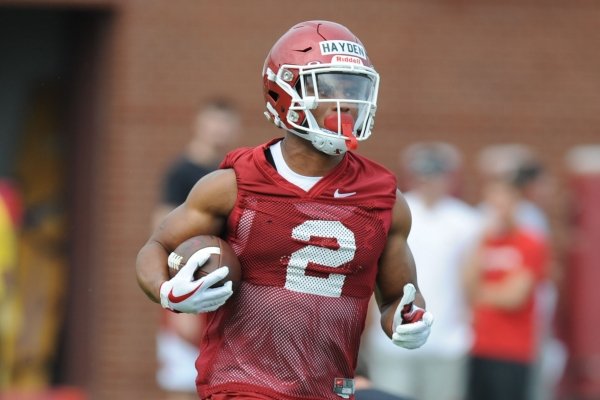 Arkansas running back Chase Hayden carries the ball Friday, Aug. 2, 2019, during practice at the university practice field in Fayetteville. Visit nwad.com/photos to see more photographs from the practice.

FAYETTEVILLE — For the second consecutive Saturday, one freshman receiver in particular has stood out in Arkansas' scrimmages.

Junior receiver De'Vion Warren, who caught a touchdown pass from Nick Starkel on Saturday, was impressed with Burks.

"Mr. Burks had a really good day," Warren added. "He's moving real well with his knee, so it's not bothering him. He was moving real well and had a couple of touchdowns actually. He had two today. It was good to see him move."

Saturday was Burks' best day of practice so far, according to Morris, and, as a whole, the freshman receivers had a strong showing against Arkansas' secondary.

"(They) played exceptionally well. These guys were making plays," he said. "The freshman wide receivers was just guys making plays. I mean that’s really it. We had several deep balls. (Burks is) very, very explosive and powerful. He’s not afraid to catch the ball across the middle. Trey Knox, again, same way.

"We just had some freshman guys stepping up and making some plays. They’ve done that through the course of camp, but today they were more consistent than I’ve seen them."

Safety Joe Foucha, having arguably the best camp of any player on the roster, Morris said Thursday, is impressed by the group's physicality and Burks and Knox's reach.

"Every day they show me something different," he said. "To me, those guys are going to explode because they came in ready. They didn’t have to come in and get physical or have to learn the playbook. It’s all there."

Starkel also connected with junior receiver Jordan Jones for a touchdown in the scrimmage and was intercepted by Foucha on a pass intended for freshman TQ Jackson. Cornerback Montaric Brown, who picked off Ben Hicks as well, was in coverage and, according to video posted to Twitter, appeared to get a hand on the ball before Foucha adjusted and raced downfield.

Brown, a sophomore from Ashdown and projected starter, has a pair of interceptions in the team's scrimmages. Foucha is a fan of Brown's aggressive play, and Morris applauded him for his commitment during the offseason.

"I’m really, really proud of where he is. He’s got a great future."

On top of Arkansas' receivers making plays, the running backs room impressed Morris although Chase Hayden, who also scored in last Saturday's scrimmage, was the lone back to reach the end zone. Rakeem Boyd and Devwah Whaley had their best day running the ball.

"They were patient with their runs and knew when to hit it," Morris said. "Some of them might have had four- and five-yard gains, but that’s what we’re after. We’re after being patient with that running game and finding that crease, so it was good to see those guys. I knew that Rakeem had a big run. He creased one, which was good to see."

Morris said the offensive line did some good things up front, which sparked the ground game. Myron Cunningham received all of the first-team reps at left tackle and true freshman Ricky Stromberg slid to left guard in place of the injured Austin Capps before finishing the day at right guard.

"Very impressed with him. He made some mistakes, got beat, especially when you’re gong against Sosa, that happens," Morris said of Stromberg. "But very impressed. He’s definitely caught the attention and the eye of us in camp."

Ty Clary, Arkansas' projected starting center, touched on the play of Boyd and Whaley on Saturday.