Morris playing the waiting game on naming a starting QB 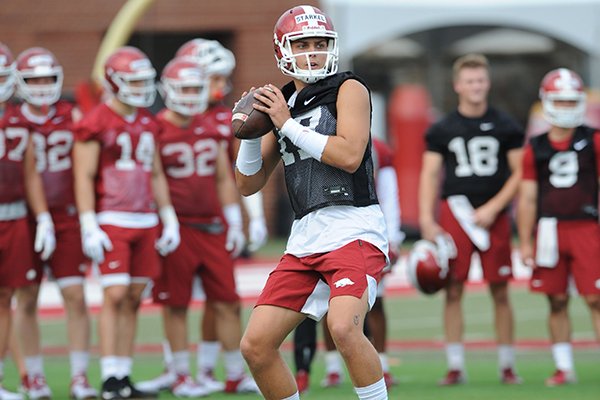 FAYETTEVILLE — It may be just two weeks until the 2019 season opener, but Arkansas head coach Chad Morris is not ready to name a starting quarterback.

He also noted that it wasn’t gamesmanship, just that he and his staff simply have not made a choice yet.

“No, I have not,” Morris said after Saturday’s scrimmage. “We’ve got a lot of evaluating that we’ve done, and it just depends on what day you ask me on. Some days it’s, you know, it’s one, some days the other. Right now, these guys are working their tail off. They’re working hard.”

Starkel had three touchdown passes and one interception in Saturday’s 110-play scrimmage, Hicks tossed an interception and Jones led the offense to a touchdown in the two-minute drill, capped by a scoring toss to Mike Woods.

It gave Morris some more data for his decision.

“I’ll watch the film and see,” Morris said. “I don’t think we’re, I don’t know the exact time we’re going to name him, or name a starter. I want to go through definitely (a scrimmage) Wednesday and see where we’re at.

“We’ve got some work that we’ll do later in the week on Friday before we have our mock game out here on Saturday. So it’ll be some live situational work on Friday, too. We’re getting closer, but again, we’re evaluating it.”

While all the offensive coaches will have some input, especially offensive coordinator Joe Craddock, Morris was quick to point the final decision is all his to make.

“We haven’t determined,” Morris said. “We’ll sit and talk as a staff. They all have one vote and I’ve got one more than all of them.

"We’ll decide as a staff. When we walk out of the staff room…we’re all 100 percent on board, whether that’s the starting center or the starting linebacker. We’re all on board at that point.”

Hicks was the starter at SMU for Morris for two years and was the No. 1 guy in the spring when Starkel was finishing degree requirements.

Asked if Starkel’s play through the first 14 practices and scrimmage had made the decision tougher, Morris said he basically expected a tough competition.

“No. I would never look at this as tough, being something tough. I think this is a huge positive for this football team. Because it’s making everybody in that room better. Nick’s doing that. Ben is doing that. Ben’s doing some really good things now. And then just to watch the progression of John Stephen Jones. The guy’s a player. He gets out there and just there’s a lot of really good things happening.

“…This is two weeks in a row I’ve seen this in this group. So we’ll see. We’ll keep pushing and I do know this, they’re earning a lot of respect from this football team for the hard work they’re putting in, like everybody else.”

Sophomore linebacker Bumper Pool has gotten a clear look at the quarterbacks.

“That is a good group,” Pool said. “They elevate each other to play. I think certain guys really step up in certain moments and it is cool to see. Every guy has a good day, every guy has a bad day. That’s just football. But I love where we are at with our quarterbacks and I am excited about the season.”

“When those are rolling, it makes us want to play better,” Pool said. “When we see them making plays, we have got to make better plays, especially on defense. If we have got a guy that is piecing the ball in, we have got to cover that. It’s not like he is throwing at their feet and we are just there making the play or thinking we are making the play. We actually have to make plays on good balls.”

Arkansas starting center Ty Clary is determined not to pick a side.

“I love the competition back there,” Clary said. “Competition breeds success. I focus on doing my job and making sure they have time to throw the ball. They both look good to me. I’m not going to…. know either way we are going to have somebody good behind us.”

Clary sized up Hicks and Starkel.

“I would say Ben is just a little bit more vocal,” Clary said. “But he’s been in that system a lot longer. Other than that it’s pretty much the same. Starkel has that confidence back there that you like to see in a quarterback.”

“Typically to my knowledge, I’m not the OC or the head coach, I don’t get to make this decision… but you kind of want just for the receivers’ sake somebody that they know how the ball is going to come to them every time,” Clary said. “And to let the quarterback himself build confidence. It’s kind of harder to build confidence if you split time.”

Clary has worked hard to improve his snapping, which was an issue last season.

“… It has been a huge focus of mine,” Clary said. “You can't start a play without getting the ball snapped back there. So every play, my first thought is snap, snap, snap. (If) y’all are still asking me about my snaps that's bad for me. I don't even want it to be a question any more.”

Davion Warren caught a touchdown pass from Starkel, who he calls “Mr. Stress Man” because “If you ever see him in his shoulder pads it looks like he don't have no neck.”

“It's a tough battle,” Warren said. “Like I said, they have their good days and their bad days. Today was pretty even and both were making good plays. Even John Stephen was making good plays with his feet and his arm. It was an even battle today.”

All of the quarterbacks have more options to throw to this season with freshmen Treylon Burks (6-3, 228) hauling in a touchdown pass on Saturday and Trey Knox (6-5, 205) also standing out.

“Every day they show me something different,” Foucha said. “The physicality is there. They have long arms. Between Treylon Burks and Trey Knox, the size is there. To me, those guys are going to explode because they came in ready. They didn’t have to come in and get physical or have to learn the playbook. It’s all there.”

Morris listed the touchdowns and turnovers from the scrimmage during his Saturday press conference:

• Treylon Burks had a TD pass from Nick Starkel

•  Buster Brown had an interception off Ben Hicks

• Chase Hayden had a TD run